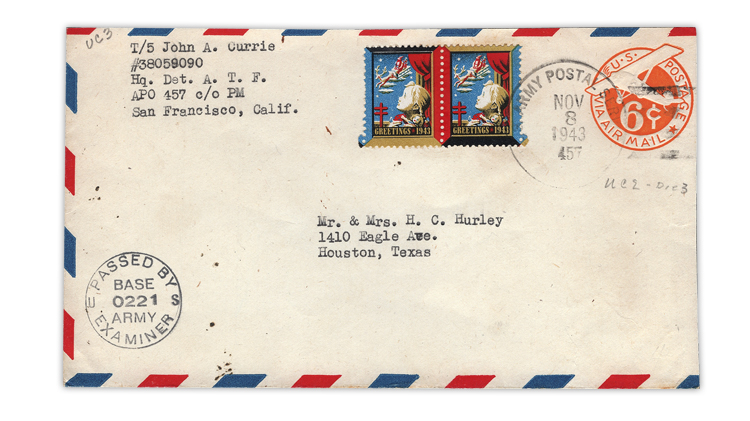 This airmail postal stationery envelope was sent from the Army garrison at Baker Island on Nov. 8, 1943, which had APO (Army Post Office) 457 in its address. Any mail from Baker Island is scarce, and examples with the 1943 Christmas seal are even more so.

Baker Island is an uninhabited atoll just north of the equator in the Central Pacific about halfway between Australia and Hawaii.

The United States claimed Baker Island in 1857. It is administered today by the U.S. Fish and Wildlife Service of the U.S. Department of the Interior, which has designated it as the Baker Island National Wildlife Refuge.

No big deal, right? But during World War II, Baker Island was occupied starting on Aug. 11, 1943, by a U.S. Army force brought in to build an airfield for use as a staging base for B-24 Liberator bombers and P-40 fighter aircraft. This was a critical step in support of the November 1943 invasion of Tarawa, which in turn was a stepping stone to the Marshall Islands, then the Mariana Islands, on the way to isolating Japan.

Once Tarawa had been successfully taken, larger air facilities were established there, and the Baker Island garrison was abandoned and its air assets transferred.

While the military post was active, its mail needs were served by military transport using the address APO (Army Post Office) 457, established Sept. 10, 1943, and closed in March 1944. One of the scarcer APOs in the Pacific area, it is valued at $150 in Jim Forte and Richard W. Helbock’s A Price Guide to U.S. A.P.O. Cancels of the Second World War, published by LaPosta Publications in 1996.

The picture shown here shows an example of this APO 457 cancel on a 6¢ airmail stamped envelope (Scott UC3). There is a pair of 1943 Christmas seals on this Nov. 8, 1943, cover. How that year’s seals got to Baker Island by early November is not known.

Searching for a 1944 Original Order of Zunks cover