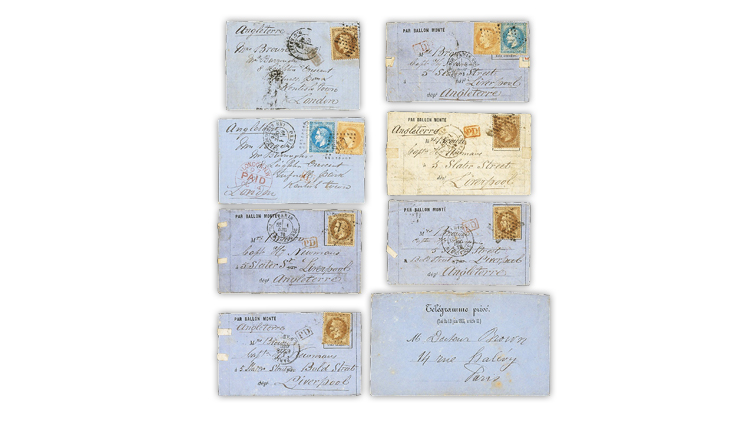 The April 14-15 Spink Collectors’ Series sale in London will feature a collection of ballon monte covers and associated collateral material. Widely regarded as the world’s first airmail letters, the covers were flown in hot air balloons during the 1870-71 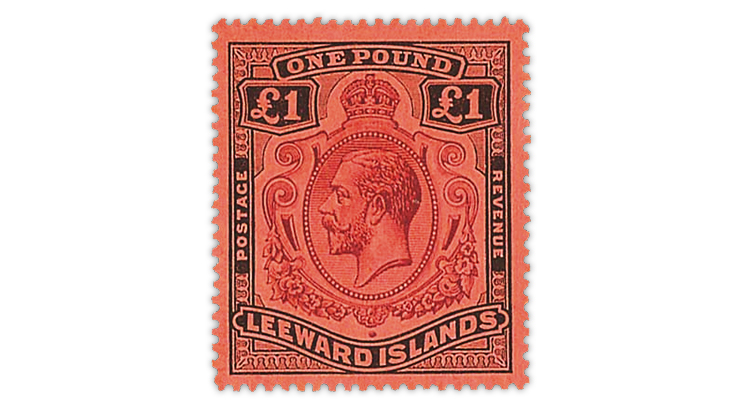 This attractive, mint never-hinged Leeward Islands 1928 £1 black and violet King George V stamp on red paper will be up for bids during the Spink auction in London.
Previous
Next

Bidders will find items to suit a broad range of budgets and collecting interests, from stamps in choice condition to unusual assemblages of covers.

The 1870-71 siege of Paris during the Franco-Prussian War is documented in a remarkable collection of eight ballon monte covers and associated collateral material and transcripts.

Spink notes that the covers were sent by William Brown, a British businessman, to his wife, Margaret, who resided in England.

Ballon monte letters are considered by many postal historians to be the world’s first airmail covers because they were carried in hot air balloons. They are listed and valued in the Scott Classic Specialized Catalogue of Stamps and Covers 1840-1940.

The ballon monte collection in the Spink auction is described in the book Besieged in Paris/An Englishman’s Account of the Franco-German War, 1870-71 by Ashley Lawrence, a copy of which accompanies the collection.

Among the more eye-catching King George V stamps to cross the Spink auction block is a lovely mint never-hinged example of the Leeward Islands 1928 £1 black and violet on red paper (Scott 83).

The Spink Philatelic Collectors’ series sale catalog is available as a downloadable PDF document from the website. Online bidding options are available after registering in advance with the firm.

In light of the current coronavirus COVID-19 outbreak, the Spink website provides the following precautions: “Bidders and lot viewers will be seated approximately one metre apart from one another and tables will be sanitized before and after use. We will also be providing disposable nitrile gloves and masks for clients who request them and will have hand sanitizer wipes readily available.”