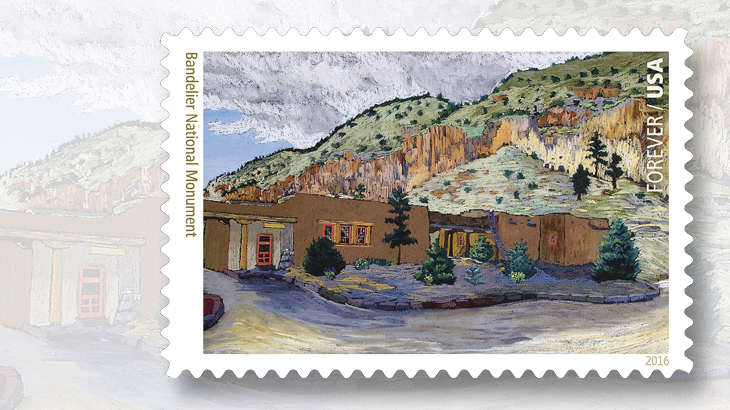 The fourth of 16 National Parks stamp designs being revealed this month by the United States Postal Service features a 1930s painting to commemorate Bandelier National Monument near Los Alamos, N.M.

The use of a painting is a shift from the first three stamps revealed, which use photographs to depict Acadia National Park, Arches National Park, and Assateague Island National Seashore.

The Postal Service is revealing one stamp per day over the course of three weeks, and will issue the 16-stamp set on June 2 with a ceremony at World Stamp Show-NY 2016 at the Javits Center in New York City. The stamp set commemorates the 100th anniversary of the National Park Service.

The Postal Service reports that the latest stamp image is a 1935–1936 pastel-on-paper depiction by Helmuth Naumer Sr. (1907–1990) of the visitor center in Frijoles Canyon.

“Bandelier National Monument protects over 33,000 acres of rugged, beautiful canyon and mesa country as well as evidence of a human presence here going back over 11,000 years,” according to the National Park Service. “Petroglyphs, dwellings carved into the soft rock cliffs, and standing masonry walls pay tribute to the early days of a culture that still survives in the surrounding communities.”