Banks aren’t the only mailers to use tags to send mail: Dollar-Sign Stamps 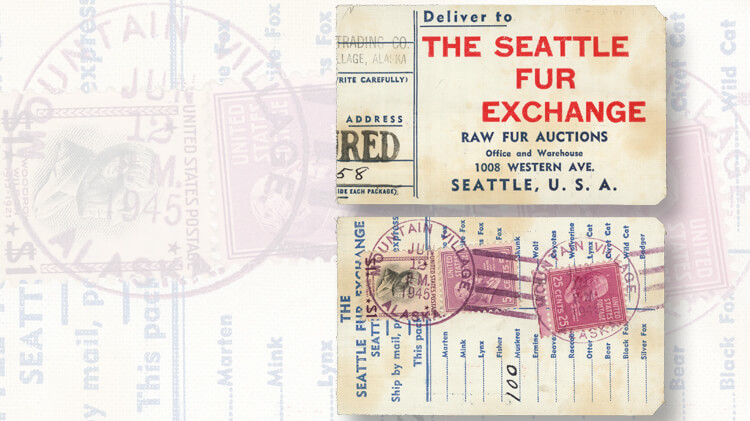 The written information on this tag (bottom) shows that it was used to mail 100 muskrat pelts from Alaska to the Seattle Fur Exchange in 1945. Three Presidential definitive stamps, including a $1 Woodrow Wilson, paid the required $1.75 postage and insurance. 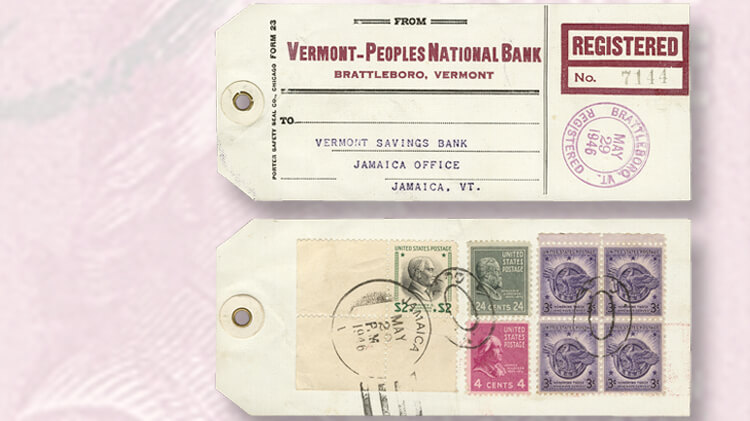 A $2 Warren G. Harding Presidential-series stamp pays most of the $2.40 postage on this registered bank tag sent between two Vermont banks in May 1946. Similar tags bearing dollar-denominated Presidential and Liberty definitives are not difficult to find. 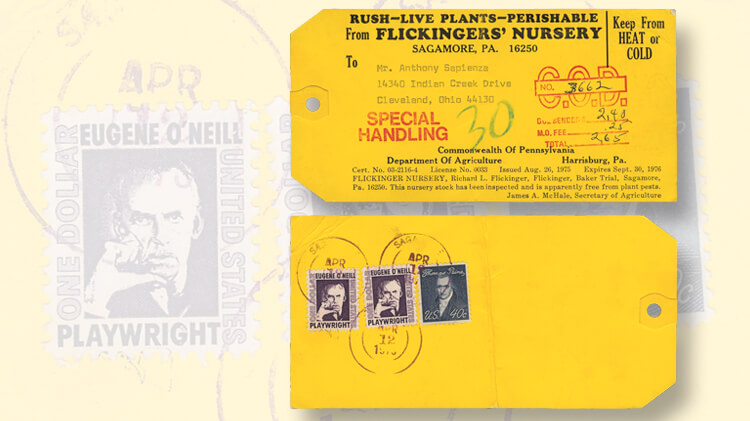 This bright yellow tag, shown front (top) and back, was used to send live plants in April 1976 from a nursery in Sagamore, Pa., to the recipient in Cleveland, Ohio. The “C.O.D.” (cash on delivery) handstamp on the front verifies that the recipient was required to pay the $2.40 postage — shown by the two $1 Eugene O’Neill stamps and the 40¢ Thomas Paine stamps affixed to the back.
Previous
Next

For most ordinary mail — letters and parcels of typical size — stamps are simply affixed to the item itself.

But what about a sack full of seeds or a box containing live plants? For these and other out-of-the-ordinary mailings, stamps often were affixed to a tag that was then tied to the item being mailed.

Of the myriad mailing tags out there, the most common is the registered bank tag.

Use of registry service provided the highest level of accountability along the bag’s mail route. Each time the bag changed hands, it had to be signed for.

“When banks returned currency (for destruction/replacement) to the Treasury (Federal Reserve), registry was free,” Lawrence explained.

“Postal history collectors are often flummoxed when they try to rate these tags. Interbank mailings probably consisted of other securities, such as bearer bonds, more frequently than money.”

Most of the bank tags I’ve encountered over the years were used when the Presidential and Liberty definitive series were current, a period of about 40 years.

Illustrated here, front (left) and back, is an example of a registered tag for a 1946 transfer mailing between two banks in Vermont. Most of the $2.40 in postage, affixed to the back of the tag, was paid with a corner-margin single of the $2 Presidential definitive picturing Warren G. Harding (Scott 833).

Among the Presidential series stamps, the $2 Harding is among the more difficult to find used on a contemporaneous cover. An on-cover use in combination with other stamps is valued at $300 in the Scott Specialized Catalogue of United States Stamps and Covers.

A registered bank tag bearing a $2 Harding, valued at $25 in the Scott U.S. Specialized catalog, is a more affordable alternative.

Now let’s take a look at a couple of tags used to send more unusual items.

First up is the partial tag shown here.

Large red lettering on the front (left) announces the recipient: The Seattle Fur Exchange in Seattle, Wash., which, as stated on the tag, held “raw fur auctions.”

Far more interesting is the back, which details the contents: 100 muskrat pelts.

Because the tag is torn at left, the return address is incomplete. Fortunately, the two June 12, 1945, postmarks tying the stamps to the tag clearly show the pelts were mailed from Mountain Village, Alaska.

The front (left) shows that it was used to mail live plants from a plant nursery in Sagamore, Pa., to the recipient in Cleveland.

Warnings on the tag proclaim the fragile nature of the contents: “Rush — Live Plants — Perishable” and “Keep From Heat or Cold.”

Although indistinct, enough letters in the two April 12, 1976, postmarks are visible to show that the three stamps were canceled in Sagamore. The 25¢ fee was paid by the recipient at the time of delivery because he used a money order to pay for the postage.