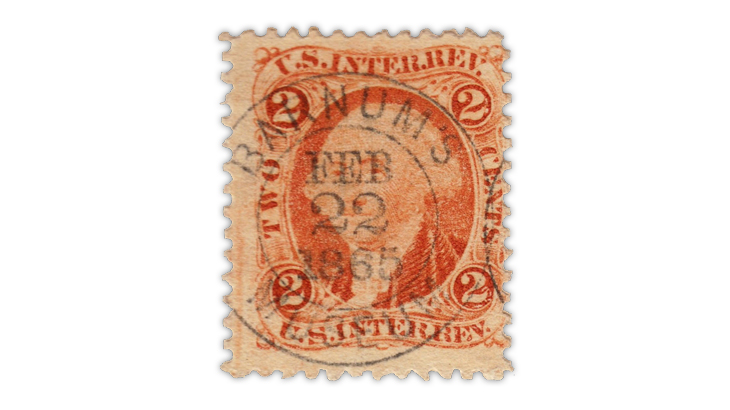 The clear marking of Barnum’s Museum on a first-issue revenue stamp (digitally cropped from an 1865 stamped carte de visite).

The March 11 issue of Linn’s Stamp News just landed on the presses and goes in the mail to subscribers Monday, Feb. 25. And if you subscribe to Linn’s digital edition, you’re at the head of the line with early access Saturday, Feb. 23. Here are three stories you'll want to check out.

Phineas T. Barnum may have been quite a huckster in his lifetime (1810-91) but artifacts of his various enterprises are frequently valued by modern collectors. The Odd Lot columnist Wayne L. Youngblood looks at one of the more elusive and entertaining of the thousands of different handstamped markings possible on United States first-issue revenues, that of Barnum’s American Museum, which predates Barnum’s circus career.

Tonga added ‘Friendly Islands’ name to some of its stamps

In the Stamps Down Under column, Janet Klug explores stamps of the Kingdom of Tonga, an island chain in the South Pacific Ocean. In the 1960s Tonga began to include the description “The Friendly Islands” on its stamps.

In the Kitchen Table Philately column in each issue of Linn's, E. Rawolik VI or E. Rawolik VII analyze the content of stamp mixtures offered to collectors. E. Rawolik, of course, is a pseudonym that is “kiloware” (a stamp mixture) spelled backward.

This week, E. Rawolik VII writes, “The ad attracted me; it offered $200 Scott catalog value for $10 with all stamps rated by Scott at 50¢ or more.” Our reviewer shares the results from this Schaefer (Michigan) purchase.