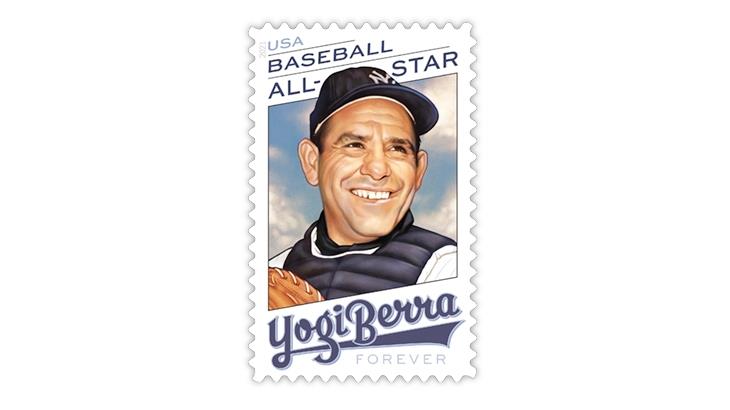 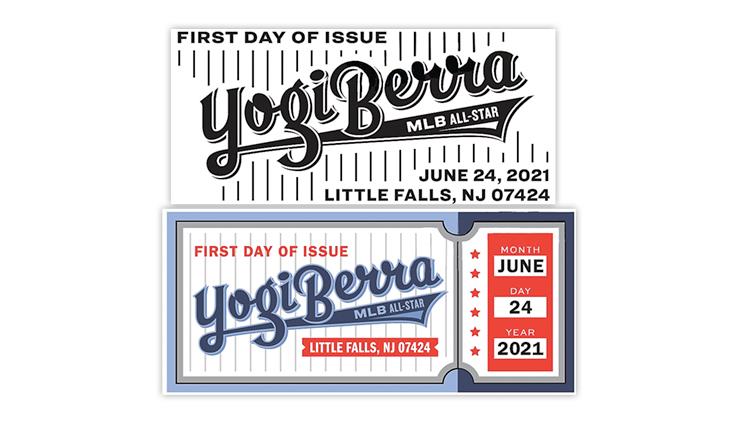 The two pictorial first-day postmarks for the upcoming Yogi Berra stamp each include the star catcher’s name in the same distinctive lettering that appears on the forever stamp. 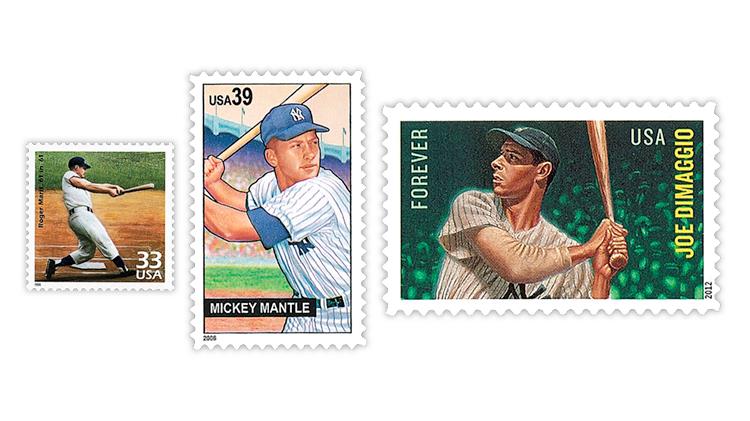 Teammates during Berra’s 19-year playing career include three other Yankees stars who have been honored on United States stamps: Roger Maris in 1999 (left), Mickey Mantle in 2006 (center), and Joe DiMaggio in 2012 (right). 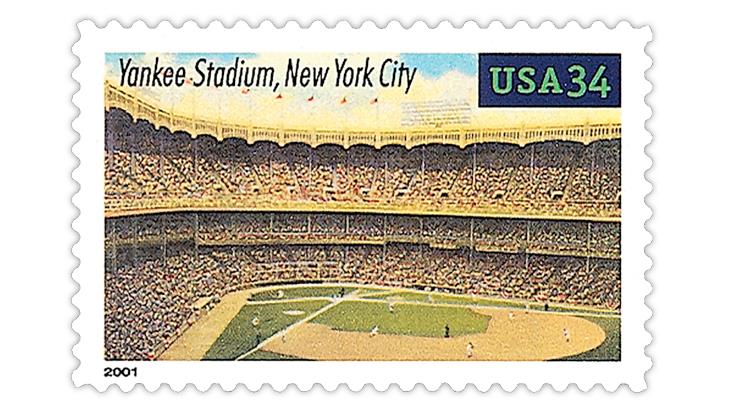 The original Yankee Stadium in the Bronx, N.Y., built in 1923, was the home park for Yogi Berra during his many years with the New York Yankees.
Previous
Next

Yogi Berra, the well-known and well-loved New York Yankees catcher who is enshrined in the National Baseball Hall of Fame, will be honored June 24 on a United States forever stamp.

Before he ever donned Yankee pinstripes, Berra (1925-2015) was a decorated U.S. Navy veteran who, at age 19, served as a machine gunner off Normandy Beach on D-Day. After his military discharge in 1946, he played professional ball for nearly two decades and was a coach and manager for many years after that.

The nondenominated (55¢) stamp honoring him will be issued June 24 with a 9:30 a.m. first-day ceremony at the Yogi Berra Museum and Learning Center, 8 Yogi Berra Drive, in Little Falls, N.J., on the campus of Montclair State University.

The museum reports the event will take place outside, and that the Centers for Disease Control and Prevention (CDC) and New Jersey state guidelines for COVID-19 safety will be followed.

Advance registration for the ceremony can be found online. The ceremony is free and open to the public. The museum will be open with free attendance on the day of issue, according to the museum’s website.

The stamp artwork by Charles Chaisson is a digital portrait of Berra smiling broadly, wearing his Yankees cap, uniform and catcher’s chest protector. The portrait appears to be modeled after an undated Associated Press photo of Berra taken at spring training in Florida.

According to the Postal Service, “The artist first sketched the image with graphite and pastel oil pencils. He then scanned the image and finished the portrait digitally by applying layers of color to add highlights and detail.”

Above the portrait are the inscriptions “USA” and “BASEBALL ALL-STAR.” Below the illustration is “Yogi Berra” in distinctive script, and the word “FOREVER.”

The Yogi Berra forever stamp will be issued in panes of 20.

Doret’s lettering appears again in the first-day cancels for the new stamp. The black postmark reads “Yogi Berra/MLB ALL-STAR,” with vertical black lines suggesting the iconic pinstripes on the Yankees’ home uniforms. The color postmark has stripes as well and the same inscription (in Yankees blue), but it is framed and arranged to resemble the entrance ticket to a baseball game.

Born Lorenzo Pietro Berra in St. Louis, Mo., on May 12, 1925, the future sports star and son of Italian immigrants was soon known as Lawrence Peter Berra. His family called him “Lawdie,” but when he was a teenage ballplayer a friend suggested a resemblance between Lawdie and an Indian yogi recently seen in a movie clip.

“From then on Berra was known as Yogi,” Dave Williams wrote for the Society for American Baseball Research. “Even his parents called him by his nickname.”

He played one season of minor league ball in Norfolk, Va., before joining the Navy during World War II.

“Berra earned a Purple Heart, a Distinguished Unit Citation, two battle stars and a European Theatre of Operations ribbon during the war, and in 2009 he was granted the Navy’s Lone Sailor Award,” Barry M. Bloom wrote for MLB.com, the website of Major League Baseball.

After returning to the minors, Berra was quickly called up to the Yankees in September 1946. He batted a strong .280 the following season and hit 11 home runs.

Berra soon became a standout player both as a powerful left-handed hitter and as a nimble and effective defensive catcher.

He could connect with almost any pitch thrown to him, rarely striking out. Among major league catchers, he held records for the most runs batted in, hits and home runs when he retired after 19 seasons. He was a 10-time World Series champion and made 18 All-Star Game appearances.

Berra was named to the National Baseball Hall of Fame in 1972. He died at age 90 on Set. 22, 2015. Two months later, President Barack Obama posthumously awarded Berra the Presidential Medal of Freedom.

“Yogi received this highest of civilian honors in recognition of his military, civil rights and educational activism,” the Yogi Berra Museum stated in response to the presidential award.

Berra was married for more than 65 years to his wife Carmen. Their sons Dale, Tim and Larry all played professional sports. Dale Berra was a shortstop who played for the Yankees during the 1980s, including while his father was team manager.

Yogi Berra’s fame as a baseball star was rivaled by his fame as a good-natured commercial spokesman for numerous products and for his distinctive way of phrasing his thoughts.

“A talented athlete, Berra became almost as well known for his paradoxical sayings, Yogi-isms — contradictory bits of logic and humor — as for his skill on the baseball diamond,” the Postal Service said.

“‘I never said everything I said,’ Berra conceded, but several quotes attributed to him appear in Bartlett’s Familiar Quotations.”

Among Berra’s most famous quips was “It’s deja vu all over again,” reportedly uttered in the early 1960s after watching his teammates Mickey Mantle and Roger Maris repeatedly slugging back-to-back home runs.

Joe DiMaggio, Berra’s teammate from 1946 until DiMaggio’s retirement at the end of the 1951 season, was also the son of Italian immigrants, and was honored on a forever stamp issued in 2012 (Scott 4697).