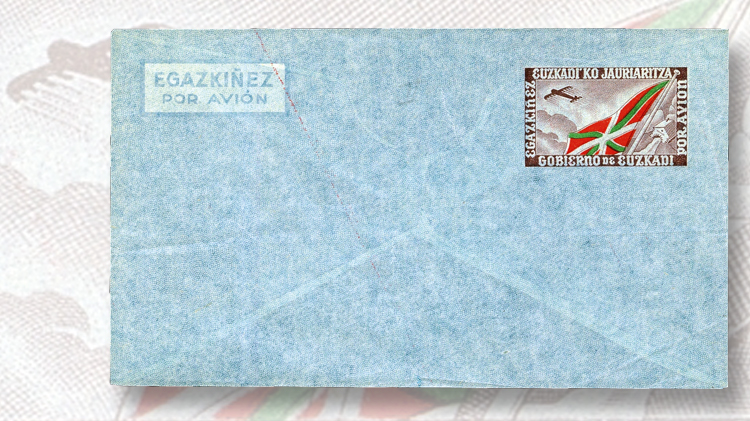 Though unused, the stamplike imprint on this airmail envelope expressed the home-rule aspirations of Basque people in northern Spain.

Covering the World — By Ken Lawrence

This unused airmail envelope has a cinderella stamp imprint that includes a bilingual inscription in Basque and Spanish languages. In English it translates as “Government of Basque Country” and “Airmail.”

The pictorial element of the indicium includes a Basque national flag in the foreground, an airplane silhouette overhead at the left, and a covered bridge over a creek below at the right.

Considering the historical context, contemporaneous opportunities to mail such an envelope legally, even with Spanish postage stamps affixed, would have been short-lived.

The envelope probably was printed and distributed in the mid-1930s when the Spanish Republic, in the throes of civil war, negotiated and adopted a statute that granted home rule to Basque provinces in Spain. The 1936 law was repealed after the Basque army surrendered to Gen. Francisco Franco’s Falangist force in 1937.

On April 26, 1937, the Basques had endured the most notorious atrocity of that cruel conflict when the German Luftwaffe Condor Legion bombed the Basque village of Guernica, intentionally killing hundreds of civilians. It became the subject of Pablo Picasso’s most famous painting, titled Guernica.