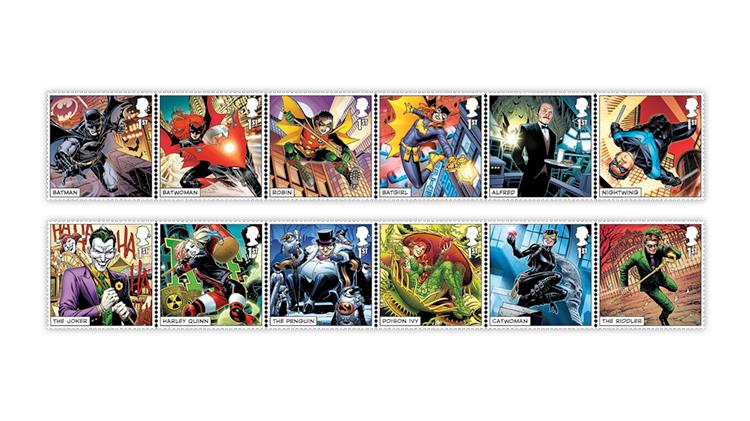 Great Britain’s Royal Mail features Batman along with his friends and foes on 12 of the 18 stamps in its DC Comics set to be issued Sept. 17. The stamp designs were revealed Sept. 1. 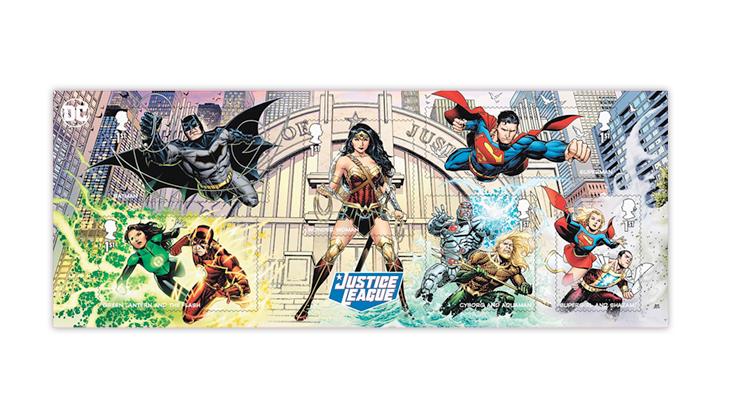 The souvenir sheet in Royal Mail’s DC Comics issue focuses on the superheroes of the Justice League.
Previous
Next

Great Britain’s Royal Mail celebrates Batman and the Justice League on stamps to be issued Sept. 17.

Royal Mail, in partnership with Warner Bros. Consumer Products, revealed the images for these 18 DC Comics stamps on Sept. 1.

The designs for the stamps were specially commissioned for Royal Mail and illustrated by British comic book artist Jim Cheung and Colombian-American colorist Laura Martin.

Matt Parkes, director of stamps and collectibles for Royal Mail, said: “Generations have grown up, spellbound by the adventures and the personalities of these Super Heroes and Super-Villains. These illustrations detail each character with such vivid imagery that they look ready to leap out of the stamp!”

Founded in 1934, DC Comics is one of the largest and oldest American comic book companies.

The 12 stamps in the two strips of six feature Batman characters.

Royal Mail said: “Since his first appearance [in 1939], Batman has built up a formidable array of ‘family’ and allies as he fights crime in the troubled streets of Gotham City. Some — such as Catwoman and Jason Todd — tread a delicate path between heroic acts and villainy. Others — such as Robin and Batgirl — have gone on to become fully fledged members of the Batman Family, fighting both alone and alongside the Dark Knight against the city’s crazed Super-Villains.”

The second strip of stamps pictures some of the Batman villains: the Joker, Harley Quinn, the Penguin, Poison Ivy, Catwoman and the Riddler.

Batman and eight other Justice League superheroes are celebrated on the six stamps in the souvenir sheet. Royal Mail describes the Justice League as “the World’s Greatest Super Heroes joining forces to protect the planet.”

Batman, Wonder Woman and Superman are pictured separately on stamps in the souvenir sheet. The other three stamps show two superheroes each: Green Lantern and the Flash, Cyborg and Aquaman, and Supergirl and Shazam!

Interabang designed the stamps and souvenir sheet, and International Security Printer printed them by lithography. The stamps in the se-tenant strips of six have traditional stamp gum, while those in the souvenir sheet are self-adhesive.

Royal Mail reports that the stamps and a range of collectible products are available to preorder and go on general sale Sept. 17.