Caption Contest: Beetle Bailey is happy about something on this 44¢ stamp, but what? 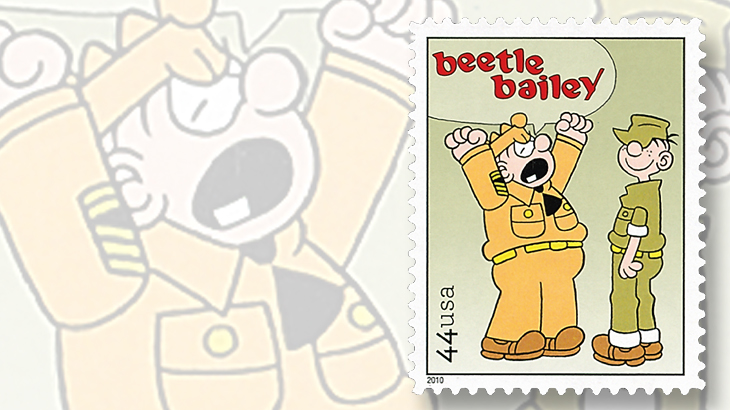 The U.S. Stamp Notes cartoon caption contest for September is the 44¢ Beetle Bailey stamp from the 2010 Sunday Funnies issue. Put yourself behind Beetle’s smile and tell me what you think he might be saying to or about Sarge. There will be a prize for the

Mort Walker created the comic strip Beetle Bailey using a cast of characters that many of us recognize from our time in the service, but with extreme characteristics that would no longer be tolerated in the modern military. Still, the strip is good for a daily laugh, and has been since September 1950 when it first appeared.

The stamp features Beetle, who seems self-satisfied about having yanked Sarge’s chain one more time. Beetle knows he will pay a price, but it seems to be his mission in life to outsmart Sarge at every turn.

This will be the cartoon caption contest stamp for September, and I invite you to put yourself behind Beetle’s enigmatic smile and tell me what you might be thinking or saying to or about Sarge in the stamp illustration. Your theme can be military, political, postal, or anything else that occurs to you.

Put your entry (or entries) on a postcard if possible and send it to me, John Hotchner, Cartoon Contest, Box 1125, Falls Church, VA 22041-0125, or email it. If you send an email, be sure to include your mailing address.

To be considered for the prizes, entries must reach me no later than Sept. 22.

Put yourself in the U.S. Capitol for September’s cartoon caption contest