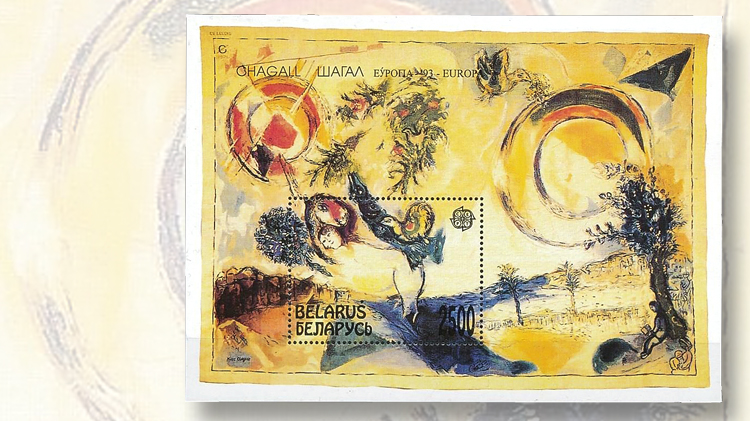 Belarus is one of the successor states that emerged from the collapse of the Soviet Union in 1991. Landlocked, it borders on Russia, Lithuania, Latvia, Ukraine, and Poland. The name means “White Russia.”

Belarus, then known as the Duchy of Ruthenia, belonged to Lithuania and later the Polish-Lithuanian Commonwealth, until it was absorbed by the Russian Empire in the three Polish Partitions.

Since 1994, Belarus has been ruled by the authoritarian dictator Alexander Lukashenko, a close ally of Russia’s Vladimir Putin.

The 2018 Scott Standard Postage Stamp Catalogue values the stamps as a mint se-tenant pair (Scott 53a) at $10. The mint souvenir sheet (Scott 54) is valued at $40. Both values are italicized, which means the Scott editors do not have sufficient market data to establish firm retail values.