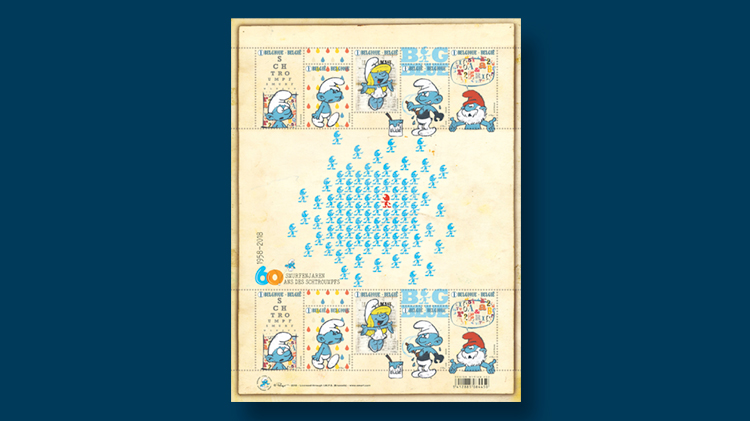 The Smurfs were created in 1958, and their 60th anniversary is commemorated by Belgium on five new stamps issued in a pane of 10. Myriam Voz designed the Smurf stamps. 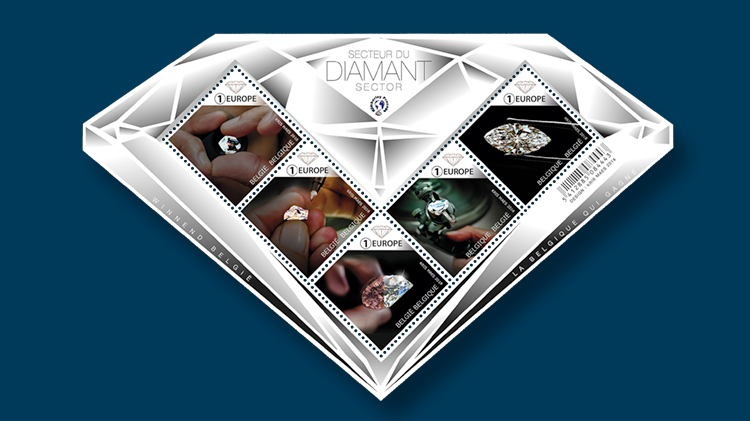 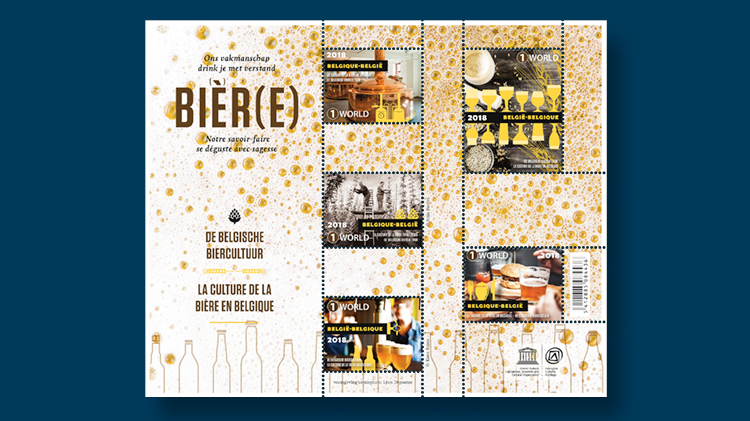 A pane of five stamps issued Jan. 29 celebrates the adding of Belgium’s beer culture to UNESCO’s Representative List of the Intangible Cultural Heritage of Humanity in 2016.
Previous
Next

Diamonds, beer and the Smurfs are making return appearances on the stamps of Belgium.

Just in 1983 and 1984 alone, Belgium honored the diamond industry on a 10-franc stamp (Scott 1155), pictured a mug of beer on a Made in Belgium stamp (Scott 1162), and showed a Smurf letter carrier on a Youth Philately stamp (1182). These subjects are represented on other Belgian stamps as well.

This time, Belgium is featuring all three on 15 stamps issued on the same day, Jan. 29.

The new souvenir sheet honoring Belgium’s diamond sector is naturally diamond shaped as are the five stamps that are in the sheet.

In a behind-the-scenes video on Belgium’s Bpost Facebook page, Maes said: “The biggest challenge is to make the diamond shine on its own, without too many special effects. It’s a round piece of stone. You have to show the evolution from rough to polished, the mapping, cutting, polishing. It was not easy to show that evolution in five stamps but I think we succeeded.”

Included in the selvage of the sheet below the words that translate to “Diamond sector” is the logo of the Kimberley Process.

According to the World Diamond Council, “The Kimberley Process is a certification system that prevents conflict diamonds from entering the legitimate diamond supply chain.”

In 2016, the beer culture in Belgium was inscribed on UNESCO’s Representative List of the Intangible Cultural Heritage of Humanity.

UNESCO said: “Making and appreciating beer is part of the living heritage of a range of communities throughout Belgium. It plays a role in daily life, as well as festive occasions. Almost 1,500 types of beer are produced in the country using different fermentation methods.”

The new Belgian pane of five nondenominated stamps for international mail honors this recognition.  The logos of UNESCO and Intangible Cultural Heritage are shown in selvage in the lower right. Beer bottles and bubbles from the head of the beer also are depicted in the selvage.

Belgian cartoonist Pierre Culliford (1928-92), known as Peyo, created the Smurfs in 1958, drawing his inspiration for these blue characters from trolls of Nordic fairy tales. The Smurfs received their own comic book series the following year and later starred in movies and a television series.

For the 60th anniversary of the Smurfs, Belgium issued a pane of 10 nondenominated domestic-rate stamps with five different designs featuring drawings by Culliford of Brainy Smurf, Grouchy Smurf, Smurfette, Black Smurf (who is painting himself blue), and Papa Smurf.

Stamps issued for use in foreign countries

Finding history in the affordable stamps of Belgian Congo