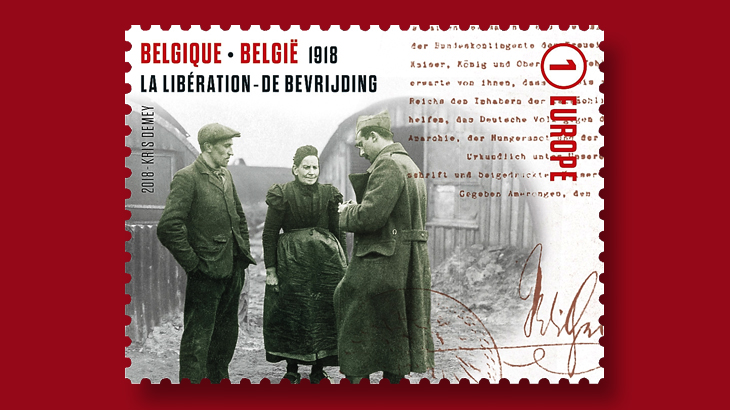 A Belgian stamp commemorates the 100th anniversary of liberation at the end of WWI. This stamp is from a pane of five issued Oct. 22.

Like many postal administrations worldwide, Belgium has issued a set celebrating the 100th anniversary of the end of World War I. This series comprises five panes of five stamps each, issued from Oct. 16, 2014 (Scott 2718), through Oct. 22 of this year.

Also on Oct. 22, Belgium’s Bpost released a souvenir sheet of two stamps with the message “We Shall Never Forget.”

Kris Demey designed all five panes in the series. He used photographs from the archives of the Army Museum and other sources in designing the 2018 pane. The photos reproduced on the stamps represent the liberation of Belgium, soldiers returning home, reconstruction, war monuments, and disabled veterans. In the last design, one soldier is reading braille and six others are playing musical instruments.

Additional items are shown in the selvage of the pane, including a large photo of a parade of the troops in Brussels, and fragments of newspapers, war propaganda and a train ticket.

Demey also designed the We Shall Never Forget souvenir sheet, which is in the shape of two symbolic poppies.

Inscribed in English around the poppies are lines from the poem In Flanders Fields by Canadian Lt. Col. John McCrae (1872-1918).

The poem begins, “In Flanders fields the poppies blow/ Between the crosses, row on row." It led to the poppy becoming a symbol of remembrance.

The stamps in this souvenir sheet show British soldiers in the trenches, war memorials, and the ruins of Ypres.

All of the stamps are nondenominated. Those in the WWI pane of five pay the basic letter rate to European countries, currently €1.30, and those in the We Shall Never Forget souvenir sheet pay an international rate.