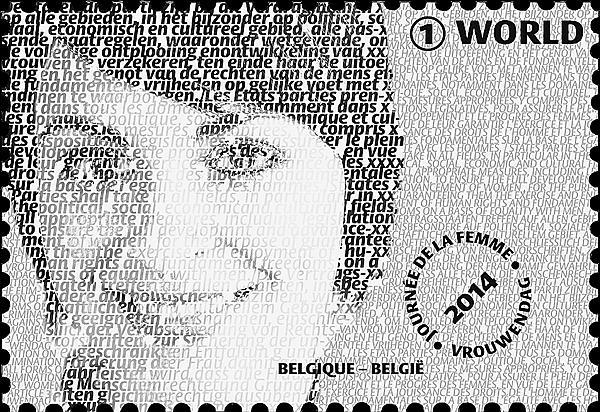 Belgium’s International Women’s Day stamp issued March 8 has achieved a Guinness world record for the most words on a stamp.

The entry on www.guinnessworldrecords.com states: “The most words on a postage stamp is 606 words in four languages taken from the Convention on the Elimination of All Forms of Discrimination against Women (CEDAW). The stamp was issued by Bpost (Belgian Post Group) to mark International Women’s Day 2014.

“The stamp depicts the face of a woman made exclusively from words. Only full words counted towards the total.”

Ann Bessemans designed the stamp. It was printed by offset in panes of five, with additional words in the selvage forming the gender symbol for woman.

The stamp is nondenominated. The numeral “1” in a circle and the word “world” indicate that it pays the international rate for letters weighing up to 50 grams.

The mailing address is Bpost, Stamps and Philately, E. Walschaertsstraat 1B, 2800 Mechelen, Belgium.