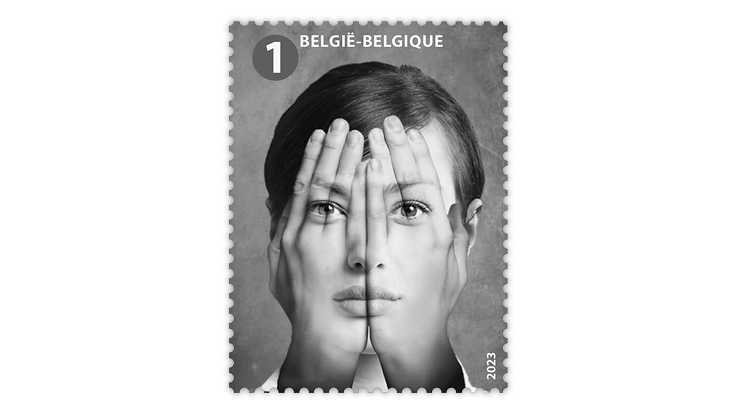 Belgium’s post office, Bpost, will commemorate 75 years of the Universal Declaration of Human Rights with a stamp to be issued March 20. The United Nations General Assembly signed the declaration on Dec. 10, 1948.

Stamp issues in Belgium’s 2023 program will include tributes to Queen Mathilde and King Philippe, celebrations of Belgian art and artists, and depictions of various wonders of the natural world.

“As per tradition,” the postal agency said, “the limited-edition stamp sheetlets [panes] are a mix of history and hope. They once again celebrate Belgium’s unique heritage.”

The program will begin Jan. 23 with four issues, one of which celebrates the 50th birthday of Queen Mathilde, who was born Jan. 20, 1973. Bpost said that the image for this stamp issue won’t be unveiled until the queen’s birthday to “add extra sparkle to the festivities.”

Another Jan. 23 issue consists of five stamps dedicated to art nouveau. Bpost said that the Brussels-Capital region has declared 2023 the Year of Art Nouveau. The five stamps in this issue show the decorative and jewelry art associated with this movement, which reached popularity between 1890 and 1910 as a reaction against 19th-century architecture and decoration.

A pane of five stamps to be issued Jan. 23 pays tribute to the town of Spa, which Bpost called Belgium’s premier health resort. Spa recently received recognition as a UNESCO World Heritage site and was featured on a Sept. 9, 2022, United Nations stamp issued for the post office at the Palais des Nations in Geneva, Switzerland, as part of a set highlighting the great spa towns of Europe UNESCO World Heritage sites (Linn’s, Aug. 29, 2022, page 1).

A limited-edition stamp to be issued Jan. 23 will feature a piece of artwork by the Antwerp-based artist Anne-Mie Van Kerckhoven. The piece, Klok, combines drawing with digital collage, Bpost said.

Also on March 20, Bpost will commemorate 75 years of the Universal Declaration of Human Rights, which was signed by the U.N. General Assembly Dec. 10, 1948. The black-and-white stamp design shows hands, which appear to be transparent, covering a face.

Another March 20 issue highlights Belgium’s covered galleries and arcades. The five engraved stamps in the set provide an inside view of the Stadsfeestzaal in Antwerp, the James Ensorgalerij in Ostend, the Passage de la Bourse in Brussels, the Passage Lemonnier in Liege, and the Passage du Nord in Brussels.

The “Hidden Soil Life” March 20 issue of five stamps will showcase insects, worms and other soil-dwellers that live under our feet.

Bpost will continue the 2023 program June 12 with four issues. One of them will celebrate 10 years since the beginning of the reign of King Philippe, who came to the throne after his father, King Albert II, abdicated on July 21, 2013. Bpost said the design of the stamp will be unveiled on the first day of issue.

A single stamp to be issued June 12 will commemorate the 2023 Special Olympics, which will be held June 17-25 in Berlin. Bpost noted that some 7,000 athletes from 170 countries will take part in the 24 disciplines featured in the games.

On June 12, Bpost will issue a stamp as part of the 2023 multination Europa stamp theme of peace. The stamp can be used for letters sent to European destinations.

To read about the rest of Belgium’s 2023 stamp program, subscribe to Linn’s Stamp News.