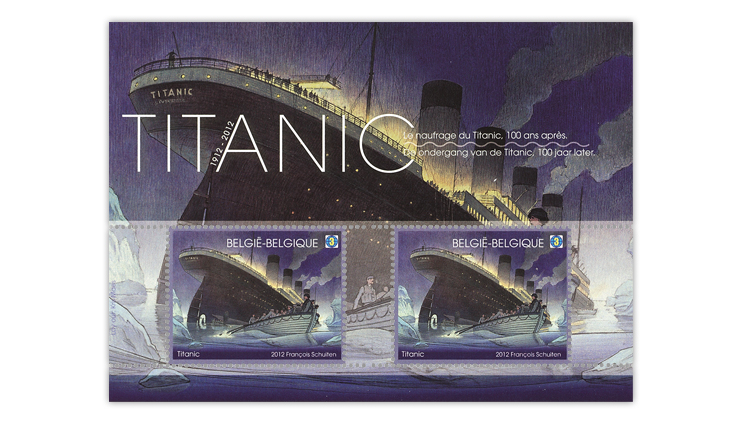 The Belgian souvenir sheet of two issued April 16, 2012, to mark the centenary of the RMS Titanic tragedy (Scott 2562) is popular with topical collectors and is a good buy in mint never-hinged condition in the $15-to-$19 price range.

The Western European country of Belgium borders France to the southwest, the Netherlands and the North Sea to the north, Germany to the east and Luxembourg to the southeast.

The Flemish population of northern Belgium speaks Dutch, while the southern part is inhabited by Walloons who speak French. German also is an official language of the country.

Belgium declared its independence in 1830 and issued its first stamps in 1849.

Modern Belgium has been a prolific issuer of generally well-distributed and not overly expensive postage stamps, many of which appeal to topical collectors.

On April 16, 2012, Belgium issued a souvenir sheet of two stamps to commemorate the 100th anniversary of the RMS Titanic tragedy (Scott 2562). The stamp designs feature stereo-optic images of the sinking of the ship.

This souvenir sheet is very popular with ship and Titanic topical collectors, as well as with collectors who specialize in stamps with stereo-optic images.

The souvenir sheet is a good buy in mint never-hinged condition in the $15-to-$19 price range.