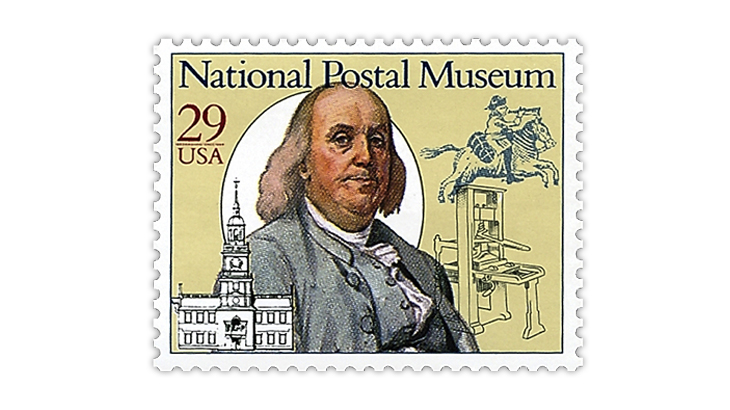 The portrait of Benjamin Franklin recently installed in the Oval Office appears to be the same portrait that served as a model for the image of Franklin on this 1993 U.S. stamp.

Benjamin Franklin, the nation’s first postmaster general, has found a spot in the Oval Office at the White House.

One of Biden’s first actions was to redecorate his White House office.

As part of that process, he gave a portrait of Franklin a favored spot.

But Franklin wasn’t selected for his duties creating the nation’s postal service. It was because of his role as a scientist, White House aides said.

Biden has made a big point of basing his actions on the COVID-19 pandemic on science, and his staff decided that a painting of Franklin would be an ideal replacement for the portrait of President Andrew Jackson.

Trump had favored the populist Jackson for his office.

Daniel Piazza, curator of philately at the National Postal Museum in Washington, D.C., said the portrait that Biden’s staff selected appears to be the Joseph Siffred Duplessis portrait that was used on one of the four U.S. 1993 stamps issued on the museum’s opening (Scott 2779) and on the 1955 ½¢ stamp in the Liberty series (1030).

The Duplessis painting, commissioned while Franklin was in Paris in 1779, is regarded as one of the best likenesses of the famous Philadelphian.

The painting was apparently among several that the National Portrait Gallery has loaned to the White House.