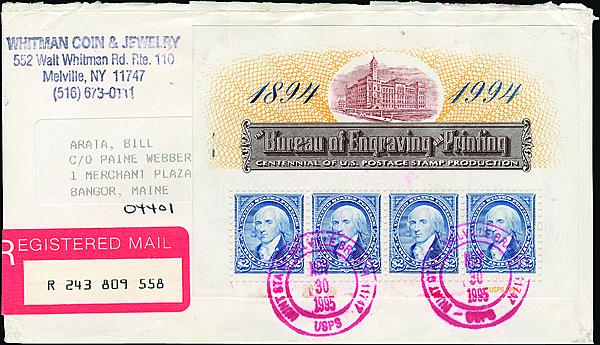 The 1994 Bureau of Engraving and Printing Centennial souvenir sheet was used to frank this registered mail cover sent Nov. 30, 1995, from Melville, N.Y. to Bangor, Maine.

The United States Postal Service issued a souvenir sheet in 1994 to mark 100 years of U.S. stamp production by the Bureau of Engraving and Printing (Scott 2875).

Each of the four $2 stamps in the sheet reprises the design of the $2 James Madison stamp from the First Bureau issue of 1894 (Scott 262).

A wide decorative selvage above the row of stamps depicts the first home of the BEP: the Auditors Building at 14th Street and Independence Avenue in Washington, D.C. The years “1894” and “1994” flank the building at left and right.

Also shown in the selvage is an ornate brown panel that reads: “The Bureau of Engraving and Printing Centennial of U.S. Postage Stamp Production.”

With a face value of $8, it was the most expensive souvenir sheet that the Postal Service had issued at that time.

A third printing variety was erroneously listed for the first time in the 2014 Scott U.S. specialized catalog as a major double transfer of the brown lettering in the decorative panel.

Recent research has revealed that this third variety is actually a double impression of the brown, which was printed via lithography, a surface printing method.

As such, it is properly a printing error and will be listed correctly as Scott 2875b in the 2015 edition of the U.S. specialized catalog to be published in October.

Stamp collectors were the main target of the sheet, and they are mainly responsible for the postal history that exists.

While I’ve seen a fair number of on-cover uses long after the sheet was issued, in-period examples are encountered less frequently.

Illustrated nearby is a small registered cover franked with a BEP souvenir sheet that was mailed Nov. 30, 1995, from Melville, N.Y., to Bangor, Maine slightly more than one year after the sheet was issued.

An exact rate of $8 for the postage and registration fee does not exist for this particular use.

In this case, the sender accepted a 3¢ convenience overpay to use the intact sheet.