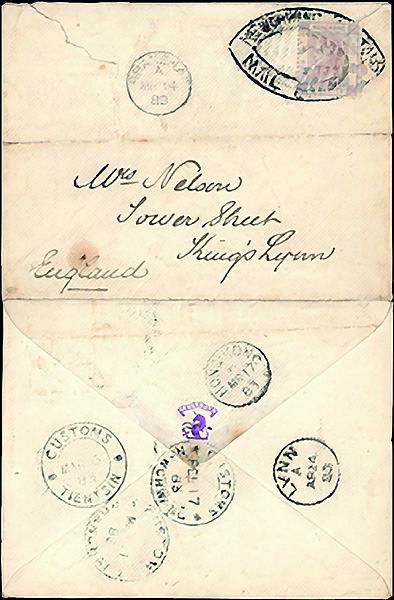 The rarity of this 1883 cover lies in the oval customs marking under the Hong Kong stamp. It tripled Interasia’s presale estimate, bringing $148,000.

The Interasia auction firm based in Hong Kong held a sale Nov. 1-4, 2014, that saw total realizations of some $8.7 million.

One highlight was a creased, torn and somewhat ratty-looking 1883 cover with a not-uncommon 10¢ lilac stamp of Hong Kong (Scott 14 or 42, depending on the watermark). What makes the cover special is a prominent oval “Newchwang Customs/Mail Matter” handstamp underneath the adhesive.

Before China developed its own postal system at the end of the 19th century, international mail was handled by one of the foreign-dominated systems: the Imperial Customs Post, the Shanghai Postal System or the several foreign agencies operating throughout China.

Discovered only a few years ago and considered unique, the cover from Newchwang (present-day Yingkou, in the northeastern province of Liaoning) is one of the earliest uses of a Customs Mail Matter handstamp in all of China. This particular marking was previously known only on a cut-out fragment. It sold for the equivalent of $148,000, or about triple its presale estimate.

Further highlights of the November Interasia sale, too numerous to summarize here, can be found on the firm’s home page atwww.interasia-auctions.com.