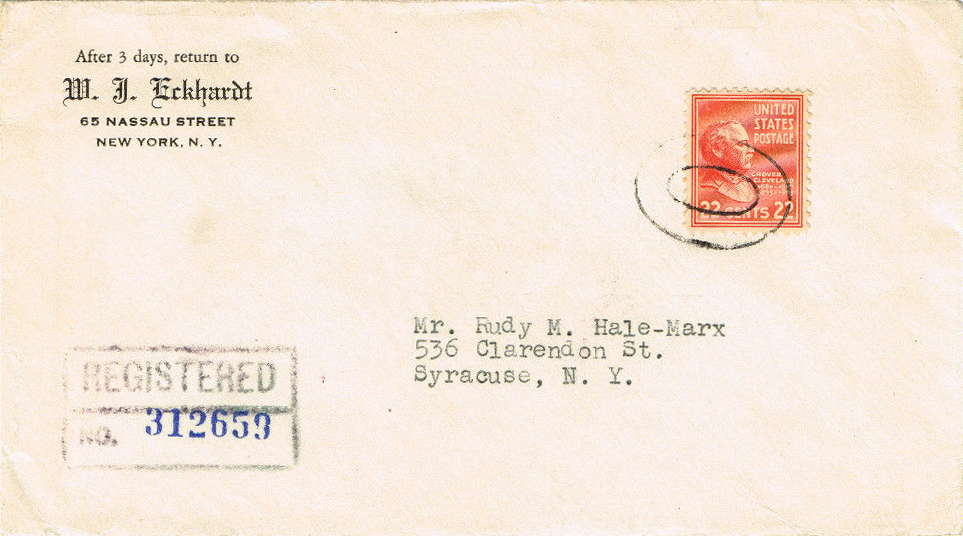 When this 22¢ solo Prexie cover was put up for sale on eBay March 15, a bidding war soon erupted. By the time the dust settled March 22, the cover had sold for a whopping $4,050.

When two auction bidders decide they must have the same thing, the results can be spectacular.

Such was the case March 22, when a solo use of a United States 22¢ Grover Cleveland stamp on a domestic registered cover sold for $4,050 on eBay.

The seller opened the seven-day auction March 15 with a starting price of $9.99. It didn't take long for the "submit bid" buttons to start clicking — and for the price to start climbing rapidly.

On March 22, the final day of the auction, the winning bidder added an undisclosed final bid. Because no other bids were received after that, the cover sold for $4,050.

Backstamps on the cover indicate that it was postmarked Dec. 19, 1941, in New York City and arrived one day later at its destination in Syracuse, N.Y.

W. J. Eckhardt, the sender, was a stamp dealer on Nassau Street, once the most famous philatelic thoroughfare in the United States.

The Grover Cleveland stamp (Scott 827), part of the popular 1938 Presidential, or Prexie, series of definitives, paid the 3¢ first-class postage, 18¢ registry fee (for indemnity of $5.01 to $25) and a 1¢ supplemental surcharge that was assessed because the declared value was greater than the indemnity covered by the registry fee.

Additional information about the cover (including an illustration) is given in an article titled "Presidential Issue Usages — 22¢" that was published in the July 2001 issue of The United States Specialist.

For perspective on the final realization, the Scott Specialized Catalogue of United States Stamps and Covers values a 22¢ solo use on a "registered local cover with return receipt" at $1,000.

In The Prexies, author Roland Rustad writes: "Find a legitimate, commercial solo usage of this stamp and you have found a treasure."

One could argue that this cover is not truly commerical, because a stamp dealer mailed it.

Regardless of its status, at least two collectors wanted it badly enough to spend a significant four-figure sum to acquire it.