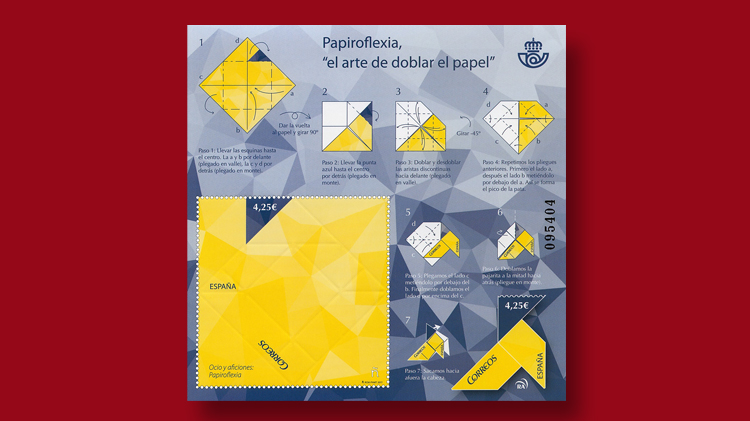 Instructions in the selvage of this 2017 souvenir sheet from Spain show how the €4.25 stamp can be folded into an origami bird.

Origami is defined on the Merriam-Webster website as “the Japanese art or process of folding squares of paper into representational shapes.”

Well, myriad stamps are also squares of paper. You can see where this is going, right?

Verbal (in Spanish) and visual directions for folding the stamp are printed in the selvage.

At bottom right in the selvage is a representation of the finished origami bird. Its blue head shows the denomination, while “Correos” (Post) and “Espana” (Spain) are printed on the body.

All of which suggests that you could use this contrived bird stamp on a letter or parcel mailed in Spain.

Now that would be a piece of modern avian postal history worth keeping.

The Spain Origami Bird souvenir sheet and dozens of other recently issued stamps are listed with their new Scott catalog numbers in the Scott New Listings Update in the Jan. 15 issue of Linn's Stamp News monthly magazine.