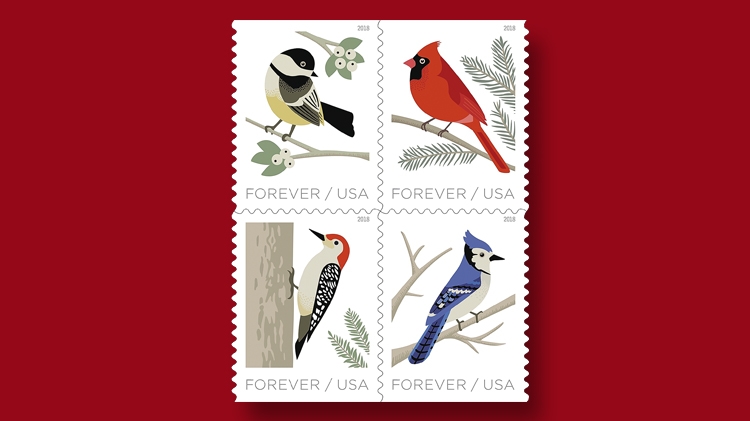 The United States Birds in Winter stamp set has a Sept. 22 issue date with a Vermont ceremony. The four birds featured in the set are the black-capped chickadee, the Northern cardinal, the red-bellied woodpecker and the blue jay. 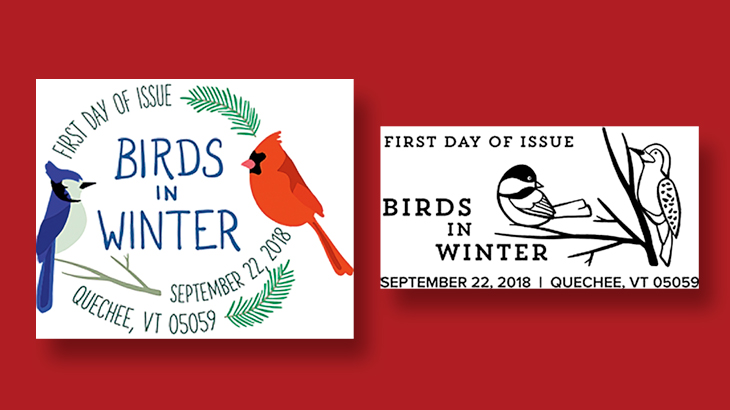 Two pictorial first-day cancels for the Birds in Winter stamps, each featuring two of the birds seen in the stamp set. 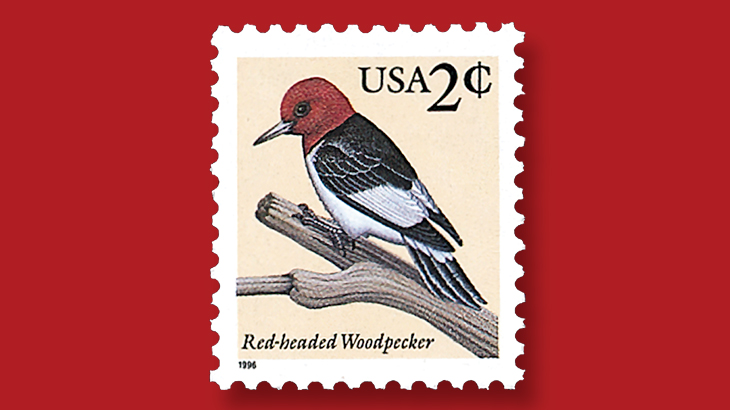 The 2¢ red-headed woodpecker definitive stamp from 1996. The upcoming appearance of the red-bellied woodpecker is a first for the species on a U.S. stamp. 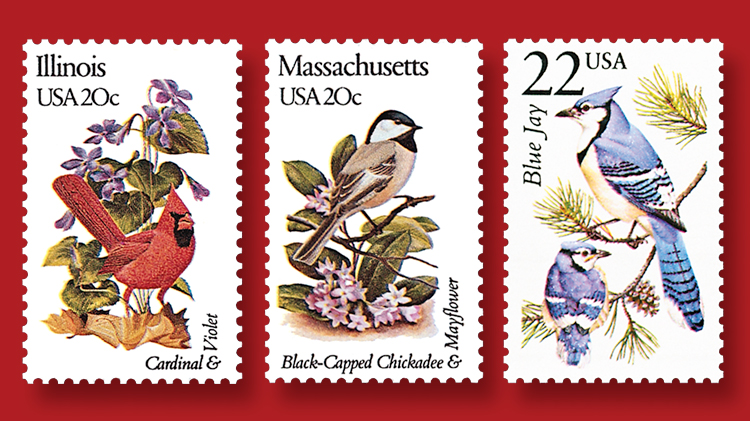 Three stamps from the 1980s show three of the four birds featured in the new set: cardinal, black-capped chickadee, and blue jay Cardinals have been depicted on numerous U.S. stamps.
Previous
Next

The nondenominated (50¢) stamps are being offered in double-sided panes of 20, a format the U.S. Postal Service describes as a booklet.

Each of the four Birds in Winter stamps show one bird perched in a tree. A black-capped chickadee (Poecile atricapillus) grasps a branch bearing small berries. A northern cardinal (Cardinalis cardinalis) is shown resting on the branch of a conifer. The red-bellied woodpecker (Melanerpes carolinus) is posed on the side of a tree trunk. The blue jay (Cyanocitta cristata) stands alertly on the leafless branch of a tree.

A first-day ceremony for these new stamps will take place Saturday at 11 a.m. at the Vermont Institute of Natural Science, 149 Natures Way, Quechee, Vt. The institute’s programs include environmental education and avian rehabilitation.

According to the Postal Service, all guests must register online to attend the ceremony, using the website www.usps.com/birdsinwinter. Additional check-in instructions are found on the website.

The offset-printed stamps were designed by USPS art director Antonio Alcala using illustrations by Nadia Taylor, an artist based in London, England.

“The stamp art highlights the handsome plumage of resident birds often spotted throughout the year’s coldest months,” according to the Postal Service. “Evoking the drab feeling of winter with the stark white backgrounds, stamp artist Nadia Taylor hoped to create a vivid contrast with the bright flashes of color found in the digital rendering of each bird.”

Three of the four birds featured on these stamps have appeared on U.S. issues before. The 1982 State Birds and Flowers set of 50 20¢ stamps (Scott 1953-2002, plus the perforation variety 1953A-2002A) includes seven stamps showing the cardinal and two featuring the chickadee. The blue jay is not an official state bird, but turned up on a 22¢ stamp in 1987 as part of the 50-stamp North American Wildlife issue (Scott 2318).

Both the cardinal and blue jay have appeared on additional U.S. stamps as well, including a forever stamp showing the cardinal in winter in the 2016 Songbirds in Snow set (Scott 5128).

While some earlier U.S. stamps have been issued depicting woodpeckers (including the 2¢ Red-Headed Woodpecker stamp from 1996, Scott 3032), the appearance in this new set is the first for the red-bellied woodpecker.

With a bold patch of red on its head (more extended on the male than the female), and a black-and-white barred back, the name “red-bellied” can be puzzling, though the bird usually sports a pale red cast to its light-colored breast.

The red-bellied woodpecker is commonly seen in the east and southeast from Texas to the Atlantic coast.

The Northern cardinal and the blue jay have similar  though somewhat broader ranges, while the black-capped chickadee is seen from Alaska throughout much of Canada and across the northern half of the contiguous United States.

All four birds are often visible year-round, making them viable subjects for a Birds in Winter stamp set.

The double-sided booklet format is popular with individual mailers, and the Postal Service clearly expects these stamps to be readily accepted by its customers, with a substantial print run of 400 million stamps.

Two pictorial postmarks have been created for first-day covers, one in black and the other in color.

The black design shows a chickadee and a woodpecker together on a tree with bare branches, while the digital color postmark shows a blue jay and a cardinal along with the green-needle branches of a conifer.