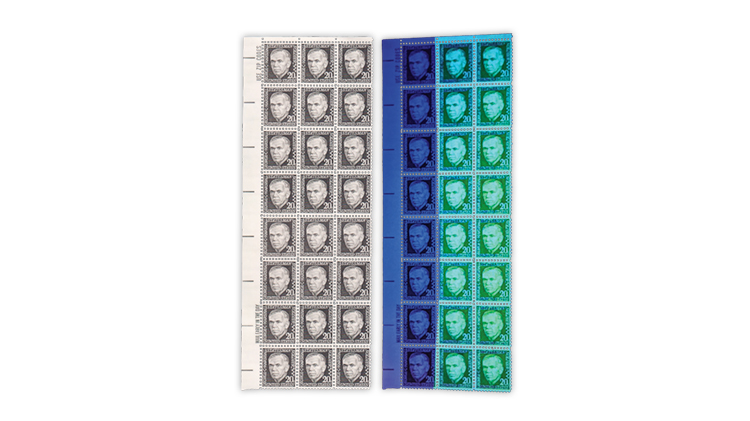 This block of 24 United States 1967 20¢ black olive George C. Marshall stamps is shown under normal lighting conditions and under shortwave ultraviolet light, which allows the tagging to be seen. Two of the stamps, the first stamp in the fourth row and th

A new tagging-omitted error on the United States 1967 20¢ black olive George C. Marshall stamp with dull gum (Scott 1289b) was recently discovered in a left corner margin block of 24.

Henry Gitner of Middletown, N.Y., brought the error to the attention of Linn’s Stamp News.

Gitner is an experienced and respected dealer who operates Henry Gitner Philatelists, Inc., in Middletown.

The block containing the new error is pictured here under normal lighting conditions and under shortwave ultraviolet light, which causes the tagging on the stamps to glow.

When viewing the block under shortwave UV light, it appears at first glance that all eight stamps in the first column are not tagged.

The other six stamps in the first column show traces of tagging in the right margin. The remaining 16 stamps in the block are completely tagged.

Gitner told Linn’s March 9 that the block containing the error was discovered in his stock by a work colleague sometime in 2020.

“I’d love to check everything I have for errors like this, but I don’t have the space or time,” Gitner said.

After carefully examining the block, Gitner submitted it in October 2020 to the Philatelic Foundation in New York City for expertization.

This new tagging-omitted error of the 20¢ Marshall stamp will be listed as Scott 1289d in the 2022 edition of the Scott Specialized Catalogue of United States Stamps and Covers, which is scheduled to be published in October.

“A single stamp will be listed from the block,” said Jay Bigalke, editor-in-chief of the Scott catalogs.

Bigalke said the catalog listing for Scott 1289d will read “As ‘b,’ tagging omitted.”