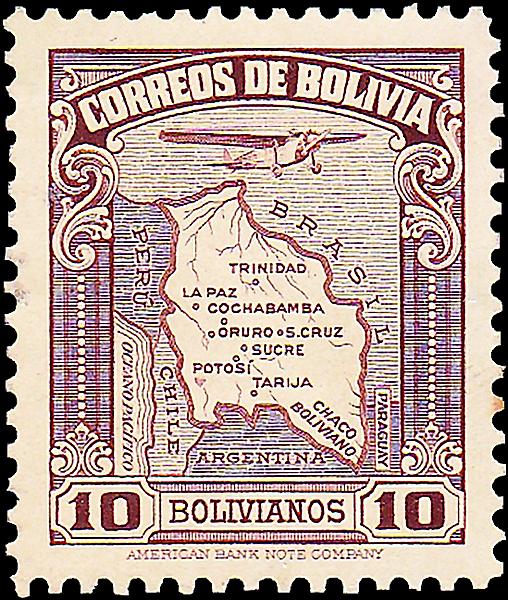 The 1935 Map airmail stamps, issued at the same time as Bolivia’s definitives, show an airplane flying over the map. The 10-boliviano stamp is the high value.

Four of the 14 regular-issue (definitive) Map stamps from Bolivia issued in 1935. The 5-centavo and 15c stamps were each printed in two different single colors in the initial printing.

Bolivia ordered a new set of stamps in 1935 from American Bank Note Co., which had apparently outbid the Perkins, Bacon firm that had been printing Bolivian stamps since 1923.

The definitives show a map of Bolivia. The airmail stamps show an airplane flying over a slightly smaller map of the country.

There was just one order and no additional printings.

Accordingly, there is only one variety of specimen overprint.

Predictably, there is little variation in color. The surprising thing is that in the original order both the 5c and 15c definitive stamps were ordered in two different colors and in the same quantities: 500,000 each for the two 5c stamps (in vermilion and in blue green), and 2 million for each of the 15c stamps (in deep rose and in ultramarine).

The denominations of the definitives range from 2c to 2 bolivianos, while the values of the airmail stamps extend from 5c to 10b.

Airmail fees were quite varied depending upon distance. There were two air routes to Europe: one to New York, then by sea to Europe; and the other by air for the entire journey, via the South Atlantic on French or German airplanes. Air fees were often well over 10b.

Supplies of the 1935 Map series began to run short in 1937. Rather than ordering a new supply from American Bank Note, Bolivia decided to overprint new values on some of the regular stamps of the 1925-33 issues in its vaults, creating Scott 233-235 and 237-238 for the definitive stamps and C52-C56 for the airmails. These surcharged stamps appeared Oct. 6.

New and higher value overprints were ordered at the same time.

The Map series was replaced in 1938 by lithographed stamps printed by Guillermo Kraft of Buenos Aires.