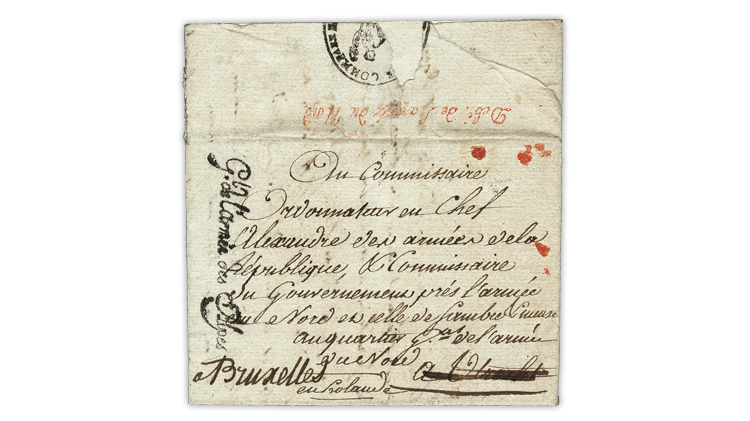 This attractive 1796 folded letter from the Fred Boom collection of the French military post in the Netherlands 1795-1813 will be up for bids during Corinphila Veilingen’s Sept. 15-18 sale of worldwide stamps and postal history. The sender of the cover wa

Corinphila Veilingen, a Dutch auction house, will auction more than 4,300 lots of worldwide stamps, postal history and country collections Sept. 15-18 at its gallery in Amstelveen, Netherlands.

“Collectors and dealers can once again look forward to a wide range of national and international philatelic material. … Many major and minor rarities await the bidders, who will have the rare opportunity of enriching their collections with a range of beautiful items,” Corinphila said in an Aug. 16 announcement about the auction.

The first day of the auction, Sept. 15, focuses on worldwide single lots and collections. Collections, box lots and literature of the Netherlands and former colonies will be up for bids Sept. 16, followed by single lots of the Netherlands and former colonies and picture postcards on Sept. 17. The auction concludes Sept. 18 with the Vlot, Boom and Caarls collections.

In the catalog introduction to the Boom collection, Corinphila describes Boom as a passionate historian and a keen student of the Eighty Years’ War (Dutch War of Independence, 1568-1648) and the Napoleonic era.

Boom received numerous awards for his exhibits over the years, including gold medals at Finlandia 2017, World Stamp Show-NY 2016, Sindelfingen 2018 and Paris in 2014, according to Corinphila.

Among the 220 lots in the Boom collection to tempt bidders is an eye-catching folded letter sent June 2, 1796, from Chambery to Utrecht and then forwarded to Bruxelles.

Important markings on the cover include a “Debe de L’armee du Nord” handstamp in red (shown upside down just above the top fold of the letter, which is opened out) and a preprinted black “Gl. de l’armee des Alpes” handstamp at right, signifying that the letter was written by Gen. Francois Christophe de Kellerman, commander of the Army of the Alps.

Part of Gen. Kellerman’s seal is visible on the opened-out fold of the letter.

According to Corinphila, this cover is one of two such letters from Kellerman known to exist. Corinphila is offering the letter, which once graced the Thiaude collection, with a starting bid of €1,500 (roughly $1,766 in mid-August).

Details of the four-day auction are provided on the Corinphila Veilingen website, including online listings for the material, as well as PDF catalogs that can be individually downloaded. Online bidding options also are available.