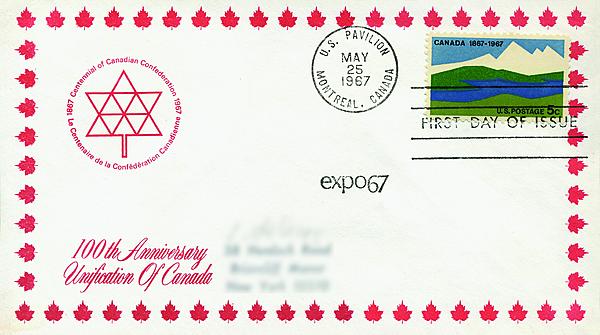 An addressed Border Craft cachet for the 1967 5¢ Canada Centenary stamp. 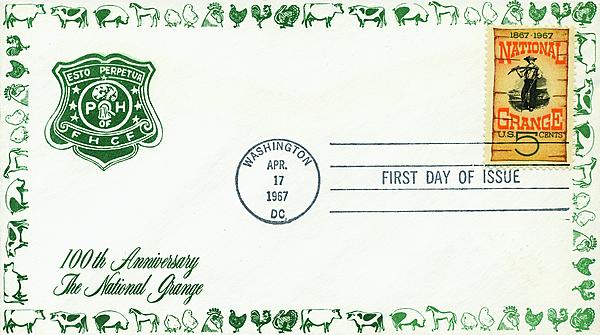 In the mid-1960s, most first-day covers were printed in one color — often black — with stock photographs and illustrations.

Most collectors at the time assumed they were the work of Joseph E. Martin, but that was not the case.

“I produced Border Craft,” Ed Mendlowitz said in a recent interview. “I designed them and produced them.”

Mendlowitz says Martin was something of a front man.

“Joe and I were partners. He handled filling all the orders, and I handled the design of the cachets, the printing, basically, the publishing of the covers,” he recalls.

In fact, “Joseph E. Martin” was a pseudonym. Joe was Joseph Martinez. The “E” stood for “Ed” Mendlowitz.

The first Border Craft cachet was produced for the 5¢ Savings Bond stamp (United States Scott 1320), when Mendlowitz was about 25 years old.

“Joe and I were always looking for new products to sell,” Mendlowitz said. The Savings Bond FDC was intended as a “limited edition.” Mendlowitz isn’t sure now if they produced 2,500 or 5,000, but says, “We pretty much sold out.”

Then Mendlowitz was drafted.

While at Fort Sill in Oklahoma for advanced training, he had free time on the weekends and began designing more Border Craft FDCs. While other soldiers were carousing in nearby Lawton, Mendlowitz put together cachets for the first two issues of 1967: the 5¢ National Grange (Scott 1323) and the 5¢ Canada Centenary (1324). Both cachets were printed in Brooklyn, N.Y.

Because the cachet line’s name was printed on the back, two passes through the printing press were required, making Border Craft covers more expensive to produce. Mendlowitz and Martin charged “premium” prices, but by the end of 1967, the line’s popularity had waned. The final issue was for the 5¢ Mississippi Statehood stamp (1337).

“Border Craft started out really good, and then it died down,” Mendlowitz said. “I don’t know why. I don’t know what the reason was, but in those days, if we couldn’t sell a couple of thousand, it didn’t pay.”

The “Joseph E. Martin” team moved on to another cachet line. Today, Mendlowitz still makes an occasional cachet, but not for sale.