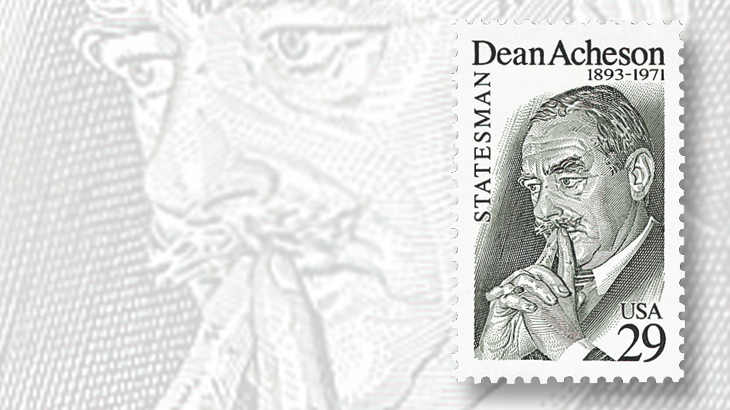 Dean Acheson, who served as the United States secretary of state under President Harry Truman, was born April 11, 1893, in Middletown, Conn. Acheson helped formulate U.S. policy during the early years of the Cold War, not only for Truman, but also as an advisor to President John F. Kennedy during the Cuban missile crisis.

Acheson attended Yale University and Harvard Law School, and served in the National Guard and the Naval Reserve during World War I.

He clerked for Supreme Court Justice Louis Brandeis for two terms before joining the Covington and Burling law firm.

“During his diplomatic career, he was influential in the development of the Marshall Plan for European economic recovery, the Baruch Plan for the international control of atomic energy, the International Bank for Reconstruction and Development, and the United Nations Relief and Rehabilitation Administration,” the U.S. Postal Service noted when issuing a 29¢ commemorative honoring Acheson.

“He provided invaluable support to President Truman during the Korean Conflict and was a principal architect of the North Atlantic Treaty Organization.”

The Dean Acheson commemorative marking his birth centenary was issued April 21, 1993 (Scott 2755). The stamp was designed by artist Chris Calle and engraved by Yves Baril.