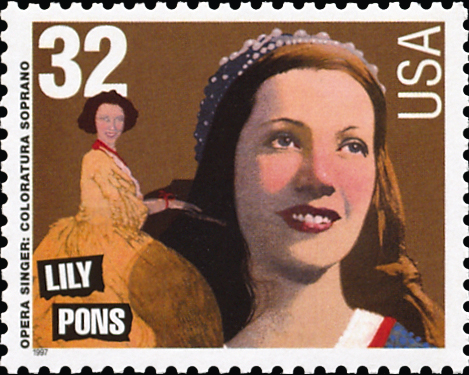 Born Alice Josephine Pons in Draguignan, France, on April 12, 1898, Lily Pons would find success in America as an operatic soprano with the Metropolitan Opera in New York.

She was a piano student before undertaking vocal study at the Paris Conservatoire, and after a brief career in France, Pons made her debut at the Met in 1931 as a virtual unknown assuming the title role in Donizetti's Lucia di Lammermoor. Her performance delighted audiences, captivated critics and elevated her as one of the country's finest operatic stars.

She experienced particular success as Delibe's Lakme, and became known throughout the world as a prominent coloratura soprano.

Pons became a naturalized U.S. citizen in 1940, and appeared on the cover of Time magazine that same year.

She remained on the Met roster for close to 30 years; appearances in films and on television during that time expanded her fame.

The 32¢ stamp honoring Lily Pons (Scott 3154) was issued Sept. 10, 1997, one of four stamps in the Opera Singers set from the American Music commemorative stamp series.