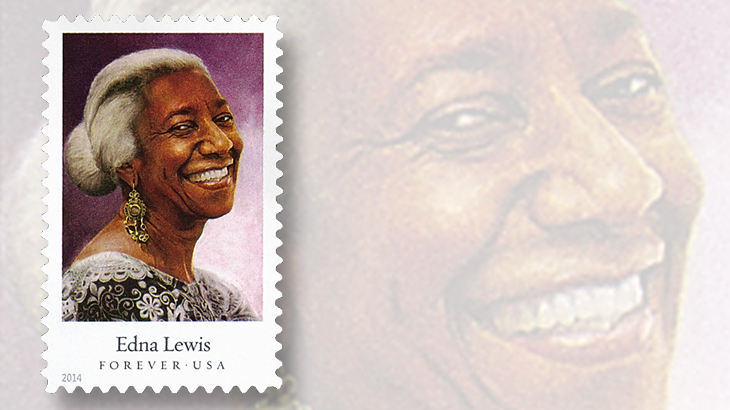 A description of Lewis’ career was prepared by the Postal Service and printed on the back side of the stamp pane.

“Known as the Grand Dame of Southern Cooking, Edna Lewis (1916-2006) found wisdom in the customs and yearly rhythms of her rural Virginia childhood. She rendered her own lard, made buttermilk from the milk of a favorite cow, and was a lifelong advocate of fresh, seasonal ingredients. Through her classic cookbooks, and by bringing such quintessential dishes as shrimp and grits and roast chicken to the plates of trendy restaurants, she showed her fellow Americans the vitality of Southern cooking.”

Lewis was born in Freetown, Va., and later lived in Washington, D.C., before moving to New York City. After working as a seamstress and dressmaker, she opened the Manhattan restaurant Cafe Nicholson with antiques dealer Johnny Nicholson, attracting a loyal following of celebrities and members of high society who gratefully devoured Lewis’ appealing dishes.

Lewis continued to cook, and to teach cooking, long after she left Cafe Nicholson in the 1950s. She also wrote The Edna Lewis Cookbook (1972), The Taste of Country Cooking (1976), In Pursuit of Flavor (1988) and, with Scott Peacock and David Nussbaum, The Gift of Southern Cooking (2003).