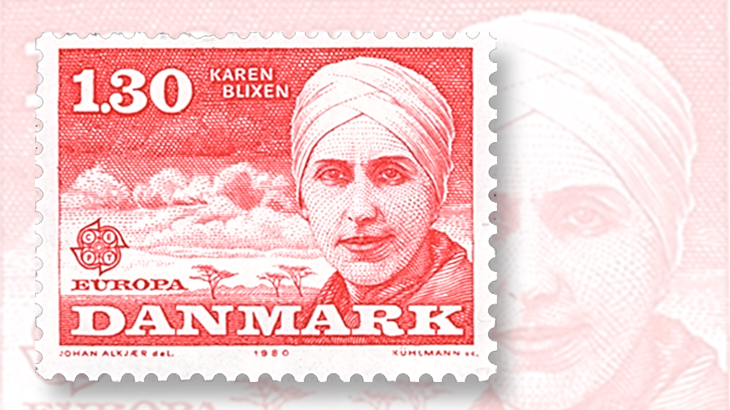 Karen Blixen, author of Out of Africa, on a 1.30-krone Europa stamp issued by Denmark in 1980.

Danish writer Karen Blixen, the author of Out of Africa who is also known by her pen name, Isak Dinesen, was born Karen Christenze Dinesen on April 17, 1885, in Rungsted, Denmark, north of Copenhagen. She was called Tanne by her family and friends.

She began writing stories and plays at age eight, but also showed a talent in art and studied drawing in Copenhagen and Paris. Early short stories were published in Danish literary journals beginning in 1907, but after she became engaged to her second cousin, Swedish Baron Bror von Blixen-Finecke, the couple emigrated to Kenya and managed a Swedish-owned coffee farm in an effort that was ultimately unsuccessful.

The marriage ended and Karen Blixen returned to Rungsted in 1931. She began writing in English, and her book Seven Gothic Tales was published in the United States in 1934.