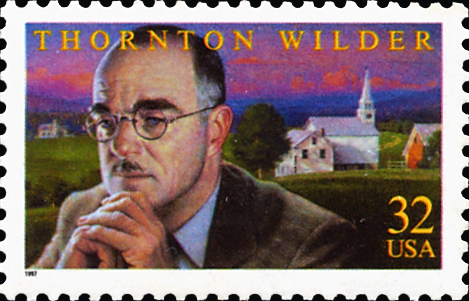 The 32¢ stamp honoring writer Thornton Wilder was issued April 17, 1997, on the 100th anniversary of his birth.

Thornton Niven Wilder, born April 17, 1897, in Madison, Wis., is best known for writing Our Town, a play that he described as "not necessarily a picture of life in a small village in New Hampshire, but an attempt to find a value above all price for the smallest events in our daily life."

Although Wilder isn't thought to have participated in hobbies, early in Our Town a young character named Wally Webb is inspired to remark, "I'm bright, too, when I'm looking at my stamp collection."

Wilder's family moved overseas in 1906 when his father was appointed consul general at Hong Kong by Theodore Roosevelt. The family then relocated to California, and then moved to Shanghai. He later attended Oberlin, Yale and Princeton.

This international upbringing may have influenced Wilder's early writing, including the famous 1927 novel The Bridge of San Luis Rey, set in Peru, and the 1926 novel The Cabala, which takes place in Rome.

Wilder wrote a number of other novels and plays, published essays and even scripted the screenplay for Alfred Hitchcock's 1943 film Shadow of a Doubt.

Along with a 1938 Pulitzer Prize for Our Town, Wilder received Pulitzers for The Bridge of San Luis Rey in 1928, and for the satirical morality play The Skin of Our Teeth in 1943. In 1965 he was awarded the first National Medal for Literature awarded in the United States.