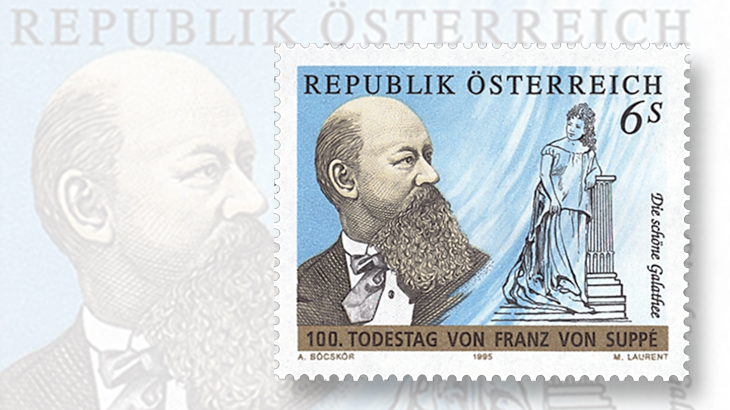 This 1995 Austrian stamp honoring composer Franz von Suppe was part of a joint issue with Croatia.

Though composer Franz von Suppe is commonly identified as Austrian, he was born in Split, now the second largest city in Croatia, in the region of Dalmatia. However, Split was part of the Austro-Hungarian Empire when von Suppe was born on April 18, 1819.

His name at birth was Francesco Ezechiele Ermenegildo Cavaliere Suppe Demelli. After his father died while von Suppe was still a teen, the family moved to Vienna, where von Suppe became a successful conductor and influential composer of light music.

He was a distant relative of composer Gaetano Donizetti, who provided guidance to von Suppe in the early years of the younger man’s career. Von Suppe began as a theater conductor in Vienna’s Josefstadt district and composed theatrical works, concert music, symphonies and operas. His compositions include Dichter und Bauer (Poet and Peasant), Die Schoene Galathee (The Beautiful Galatea), and Leichte Kavallerie (Light Cavalry). He died May 21, 1895, in Vienna.

On Sept. 15, 1995, a joint issue from Austria and Croatia honored von Suppe with matching stamps that show a portrait of the composer and a scene from The Beautiful Galatea (Austria Scott 1686, Croatia Scott 253).