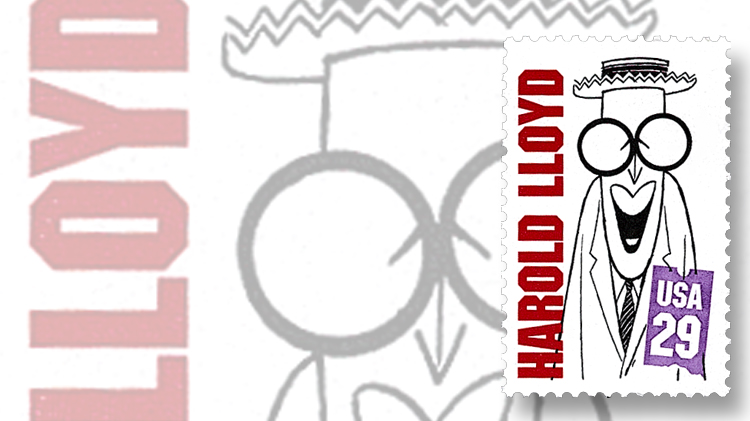 A hugely successful star of silent films during the early years of the 20th century, Harold Lloyd was born April 20, 1893, in Burchard, Neb.

When his parents divorced in 1910, Lloyd moved to San Diego with his father, and began his acting career just a few years later after relocating to Los Angeles. He developed a recurring persona known as the glass character, a confident everyman wearing large horn-rimmed glasses (with no lenses), and his popularity soared.

“Harold Lloyd was one of the biggest stars of the silent era,” according to press material released by the United States Postal Service on March 2, 1994. “He made more than 500 movies, beginning in 1914, and his best loved features include Safety Last, The Freshman, and The Kid Brother.”

The USPS announcement was for a set of 10 Silent Screen Stars stamps issued April 27, 1994, which included one 29¢ stamp honoring Harold Lloyd (Scott 2825). The stamp designs were drawn by noted caricaturist Al Hirschfeld.

Lloyd was also a screenwriter, director and producer, and in his later years he became devoted to philanthropic efforts. He received an honorary Oscar in 1953, and died in 1971.