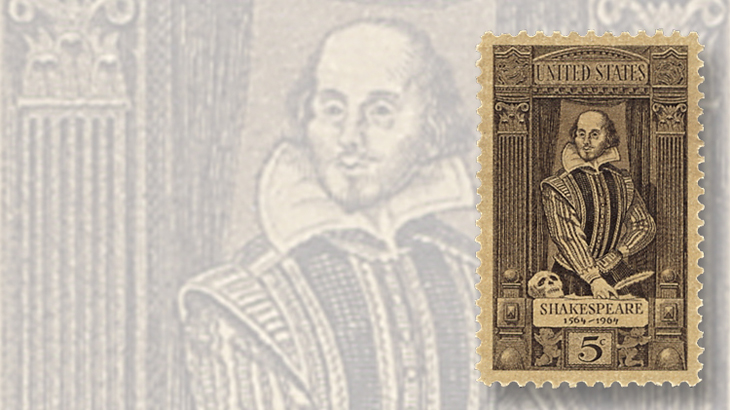 William Shakespeare was honored on a 5¢ United States stamp in 1964 to mark the 400th anniversary of his birth.

There is some small uncertainty concerning William Shakespeare’s birthdate. It is known that he was baptized April 26, 1564, at Holy Trinity Church in Stratford-upon-Avon, so his birthday traditionally has been commemorated on April 23.

Oddly, Shakespeare also died on April 23, in 1616, on what presumably was his 52nd birthday.

And that date was exactly 400 years ago today.

Shakespeare’s fame as a playwright and poet has so solidified over the course of four centuries that it is doubtful that any other writer will ever be viewed with greater universal regard than the Bard of Avon.

Shakespeare wrote some 38 plays during the roughly 25 years before 1613, when he seems to have retired to Stratford. He also wrote sonnets and other poems, and often took roles in his own plays as an actor.

So why does this British writer, who died four years before the Mayflower dropped anchor in Plymouth, appear on a United States stamp?

Though U.S. stamps generally represent U.S. subjects, Shakespeare’s impact on world literature easily transcends national boundaries. The U.S. Post Office Department, in its Philatelic Release No. 45 dated July 11, 1964, noted only that the Shakespeare Anniversary Committee, which “the late President Kennedy established and President Johnson continued,” was represented at the July 11 design unveiling by the group’s vice chairman and executive director.

The news release also notes that in the detailed stamp design, near Shakespeare’s right hand, is found “the most celebrated skull in theatredom" — that of "alas, poor Yorick.”