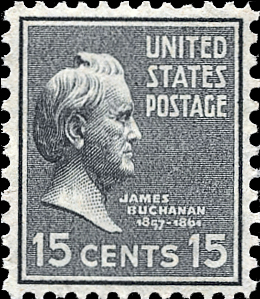 The 15th president of the United States, James Buchanan, was born April 23, 1791. He is shown on a 15¢ stamp from the 1940 Presidential definitive series.

The last former secretary of state to become president of the United States was James Buchanan, just before the American Civil War. He is also known for being the only lifelong bachelor to serve as president.

A native of Pennsylvania, Buchanan graduated from Dickinson College and served in a volunteer cavalry unit during the war of 1812.

He represented Pennsylvania in the U.S. House from 1821 to 1831, then served as the U.S. minister to Russia, and as a U.S. senator (again representing Pennsylvania).

During the first week of his presidency, the Dred Scott decision by the Supreme Court ruled that people of African ancestry could not become citizens of the United States, sharply limiting the rights of even those who were free. The decision also determined that the nation could not restrict slavery in the U.S. territories.

The divisions between the southern and northern states widened during the Buchanan presidency, and in its final months, after Lincoln's election, the first southern states would secede from the nation.

Buchanan retired to Wheatland, his Pennsylvania home, and died at age 78 on June 1, 1868.