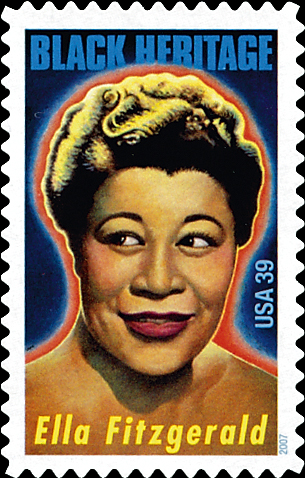 Printed on the back of the pane for the 39¢ stamp honoring singing legend Ella Fitzgerald is this message: "Ella Fitzgerald (1917-1996) was widely known as 'the first lady of song.' Her extraordinary vocal range and flexibility, combined with her gift for pitch, rhythmic sense, and flawless diction, made her one of America's most distinctive singers of jazz and popular tunes."

Ella Fitzgerald was born April 25, 1917, in Newport News, Va., but when her parents divorced soon after her birth, her mother moved to Yonkers, N.Y., with Ella.

After her mother's death in 1923, young Ella had a difficult childhood, culminating in an escape from a harsh reform school. She was on her own in New York City at age 17 when she sang in an amateur night performance at the Apollo Theater, and was hired by bandleader Chick Webb.

Her first recording, Love and Kisses, was made for Decca Records in 1936, and two years later she shot to fame with the charming A-Tisket, A-Tasket, which sold more than a million copies.

With appearances in film and on television, Fitzgerald became a household name and continued to perform into her 70s, when health problems took their toll. She died at age 79 on June 15, 1996.

During her lifetime she sold more than 40 million albums. Between 1958 and 1995 she won 14 Grammy awards, including a lifetime achievement award in 1967. She was awarded the Presidential Medal of Freedom, received the Kennedy Center for the Performing Arts Medal of Honor, several honorary doctorates and other accolades.