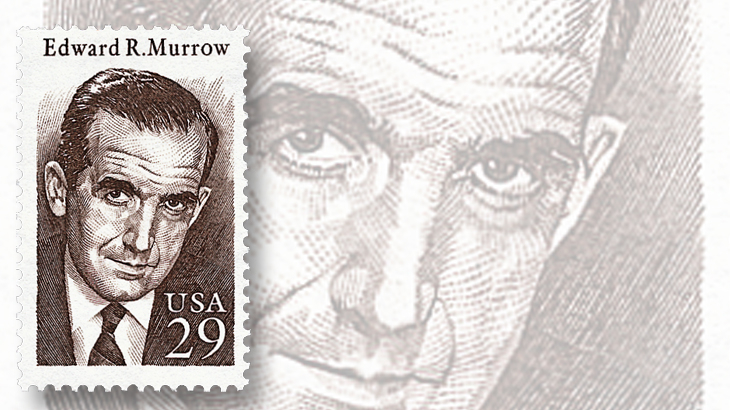 Broadcast journalist Edward R. Murrow, honored on a 29¢ stamp in 1994.

American news reporter and broadcaster Edward R. Murrow was born Egbert Roscoe Murrow in Polecat Creek, N.C., on April 25, 1908. He changed his first name to Edward while at Washington State College, where he graduated in 1930.

He began working at the Columbia Broadcasting System in 1935, arranging interviews for radio broadcasts. He became the head of the network’s European news bureau as war approached, and his steady reporting from London became the source many Americans turned to for the latest details.

After the war Murrow returned to the United States with his wife and young son, broadcasting news and feature programs for CBS, including the interview program Person to Person, and the personal essay report This I Believe. He began appearing on television in the 1950s, and he reported from the war zone during the conflict in Korea.

On March 9, 1954, Murrow hosted an episode of his See It Now program titled A Report on Senator Joseph R. McCarthy that was critical of the tactics McCarthy employed to uncover suspected Communist espionage in the United States. That report and other incidents were instrumental in bringing about an end to McCarthy’s investigations and led to his censure by the Senate later that year.

Murrow ended his 25-year career with CBS in 1961, accepting President John F. Kennedy’s appointment as director of the U.S. Information Agency. Murrow was diagnosed with lung cancer in 1963 and died two years later.