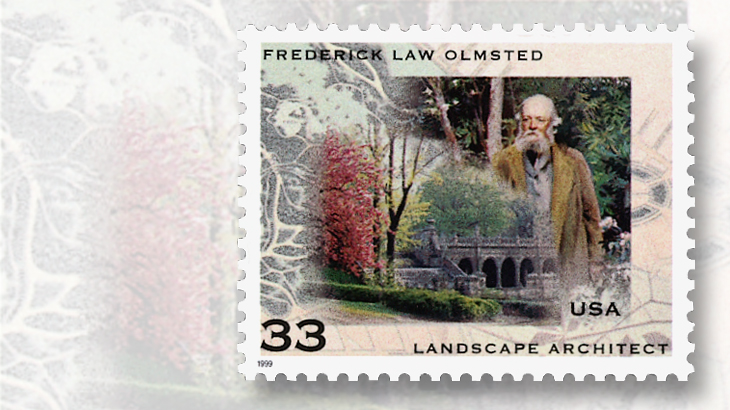 The 33¢ Frederick Law Olmsted commemorative issued in 1999 shows the landscape architect with a scene from Central Park.

Frederick Law Olmsted, born April 26, 1822, in Hartford, Conn., was one of America’s most prolific park designers, responsible for the design of New York City’s Central Park and other public landscapes.

Before he was appointed superintendent of the Central Park project in the 1850s, Olmsted had worked as a merchant seaman and as a newspaper writer.

He collaborated with Calvert Vaux on the Central Park design, which included expansive lawns and foliage at the periphery that held the growing city at bay.

Olmsted established a home and office in Brookline, Mass., that was designated a National Historic Landmark in 1963. It became part of the National Park system in 1979.

The 33¢ Frederick Law Olmsted stamp issued Sept. 12, 1999, features a portrait of Olmsted and an image of Central Park. Around the edges of the central vignette are glimpses of plans for two other Olmsted-Vaux projects: Prospect Park in Brooklyn, N.Y., and the Buffalo Park System in upstate New York.