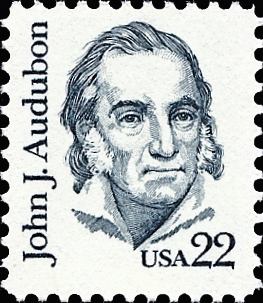 The 22¢ stamp honoring John James Audubon in 1985 (Scott 1863) was the second to show a portrait of the Haitian-born ornithologist and artist. In 1940, a 1¢ green Audubon stamp (874) was issued in the American Scientists set of the Prominent Americans series. The new stamp issued 45 years later was part of the Great Americans definitive series.

Audubon was born 230 years ago on April 26, 1785, in Les Cayes, when Haiti was the French colony of Santo Domingo. He moved with his father to France when he was eight years old, and was sent to the United States when he was 18. In Louisiana he studied natural history and spent time drawing and painting birds.

His paintings were published in London, England, and his book Birds of America was completed in 1838 and released in 87 folio parts depicting more than 1,000 birds.

Audubon died Jan. 27, 1851. The National Audubon Society that bears his name was founded to protect endangered birds, and today it also works to conserve and restore natural ecosystems.