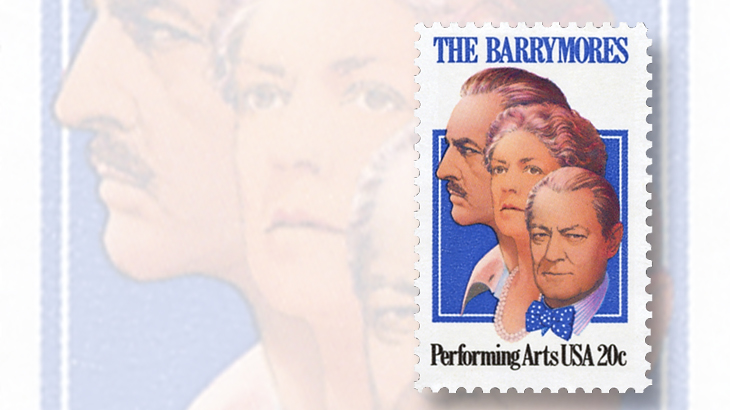 Stage and screen actor Lionel Barrymore is shown at lower right on a 1982 commemorative.

All three were stage actors, and Lionel also performed on radio and in films, composed music for film soundtracks, and directed more than a dozen movies.

Lionel won the Best Actor Academy Award in 1932 for his role as alcoholic attorney Stephen Ashe in A Free Soul.

Two years later, he began an annual tradition of appearing as Ebenezer Scrooge in a radio performance of Charles Dickens’ A Christmas Carol.

He took on the role of Dr. Gillespie in a series of Dr. Kildare movies in the 1930s and 1940s, and he is also recognized in the role of the heartless banker Henry F. Potter in Frank Capra’s 1946 Christmas film It’s A Wonderful Life.

Lionel Barrymore died Nov. 15, 1954, at age 76. He is the great-uncle of actress Drew Barrymore, his brother John’s granddaughter; at age 7, she was present at the 1982 first-day ceremony.