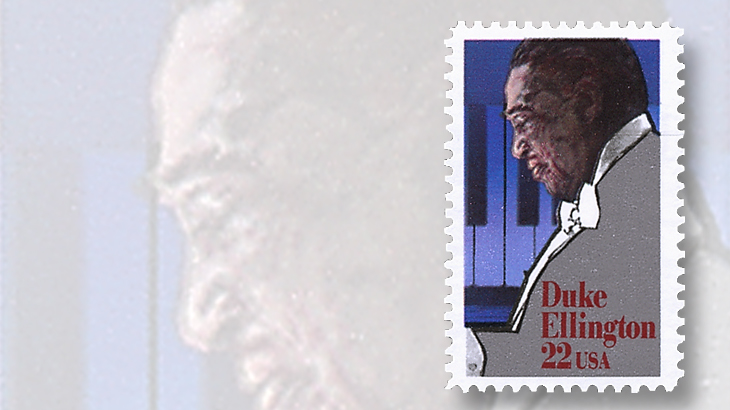 Duke Ellington was commemorated on a 22¢ stamp in the Performing Arts series. The stamp was issued April 29, 1986.

The son of musicians, Ellington took piano lessons and learned to emulate ragtime players by playing their songs by ear. He formed a band and performed at local parties and gatherings, which led to more prestigious club dates and recording opportunities.

In 1927, Ellington landed a regular gig at the Cotton Club in Harlem, N.Y. The club’s regular radio broadcasts propelled Ellington’s popularity, and in 1929 he starred in the short film Black and Tan.

Ellington was depicted leading his orchestra on a 42¢ stamp commemorating Black and Tan. The stamp (Scott 4336) was issued July 16, 2008, in a set titled Vintage Black Cinema.

It was the second stamp appearance for Ellington, who had previously been honored with a 22¢ stamp in the Performing Arts series. The stamp was issued April 29, 1986, on what would have been Ellington’s 87th birthday. Ellington died in 1974.

In its 1985 Philatelic Release No. 116, the United States Postal Service wrote, “Combining lush melodies and complex rhythms, Duke Ellington created more than 900 compositions, a repertoire characterized by its unprecedented range of form and expression.

“Although many of his songs like Sophisticated Lady and Satin Doll endure as popular classics, Ellington created a remarkably varied body of work which includes sacred music, film scores and extended symphonic pieces.”