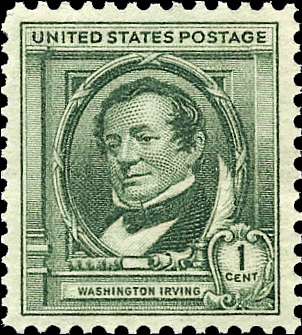 Washington Irving was born in New York, N.Y., on April 3, 1783. He found fame with his stories "Rip Van Winkle" and "The Legend of Sleepy Hollow" from the 1819-20 book The Sketch Book of Geoffrey Crayon, Gent., but Irving was also a diplomat, essayist and biographer.

He studied law as a young man, but pursued writing with a series of satirical essays and a book, the comical A History of New York. After serving in the War of 1812, Irving left for Europe, where he wrote the stories and essays that would become The Sketch Book.

As a result of these early successes, Irving has been referred to as America's first man of letters.

His fame spread in England and the United States, and he would publish additional stories and books, including The Life and Voyages of Christopher Columbus (1828) and Tales of the Alhambra (1832).

After returning to the United States in 1832, Irving traveled to the American West, and wrote A Tour on the Prairies and other works.

He wrote a significant biography of his namesake, George Washington, and was named the American ambassador to Spain by President John Tyler in 1842.