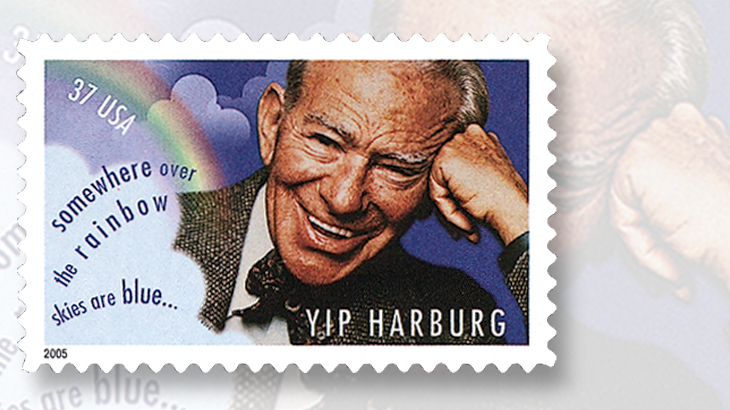 Lyricist Yip Harburg was honored on a 37¢ commemorative stamp in 2005.

Edgar Yipsel “Yip” Harburg was born Isidore Hochberg in New York City on April 8, 1896. Harburg would become one of America’s most popular song lyricists, whose many successes included Over the Rainbow and other beloved tunes from the 1939 film The Wizard of Oz.

When the United States Postal Service issued a 37¢ commemorative stamp honoring Harburg on April 28, 2005 (Scott 3905), it showed the smiling songwriter along with his lyrics to his familiar composition: “Somewhere over the rainbow, skies are blue …”

In a press release prepared for the stamp issuance, the United States Postal Service noted that “Harburg wrote the lyrics for more than 600 songs for theater and film, all distinguished by their intelligence, humanity, and inventiveness. He wrote for many of his era’s greatest entertainers, including Al Jolson, Groucho Marx, Judy Garland and Bert Lahr.”

Harburg also worked with some of the great composers of his day, including Jerome Kern and Harold Arlen, and he was close friends with Ira Gershwin. With Jay Gorney he wrote the Depression-era standard Brother, Can You Spare a Dime? In 1947 he collaborated with Burton Lane and Fred Saidy on the Broadway hit Finian’s Rainbow.