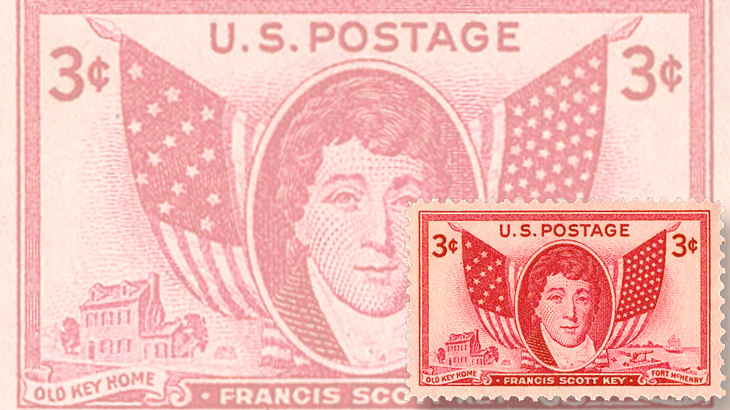 Francis Scott Key, the lawyer who wrote The Star-Spangled Banner during the War of 1812, commemorated on a 3¢ stamp from 1948.

Regardless of all that Francis Scott Key accomplished in his lifetime, he will be known forever after as the composer of The Star-Spangled Banner, the national anthem of the United States.

Key was born Aug. 1, 1779, on a plantation in Frederick, Md., and would study law in Annapolis. Though opposed to America's engagement of the British in the War of 1812, Key joined the Army in 1814.

As battle commenced in Baltimore, Key was among those detained by the British aboard the Tonnant, and he became an observer of the fierce shelling of the United States' Fort McHenry during the 1814 Battle of Baltimore.

Key was known for composing verse, and as the battle raged, he made notes upon the back of a letter in his pocket -- notes that would soon form the four stanzas initially titled Defence of Fort M'Henry, but later identified as The Star-Spangled Banner. The words were put to the music of John Stafford Smith's popular tune, To Anacreon in Heaven, and adopted as the country's national anthem more than a century later, in 1931.

Following his military service, Key had a distinguished legal career that included defending Rep. Sam Houston during his trial in the U.S. House of Representatives after Houston was charged with assaulting another Congressman. Houston was found guilty, but was merely reprimanded for his actions.

A 3¢ commemorative stamp honoring Francis Scott Key was issued Aug. 9, 1948 (Scott 962). Later U.S. stamps pay tribute to The Star-Spangled Banner, including the 1978 15¢ Fort McHenry Flag stamp in the Americana definitive series, which is inscribed with words from the final lines of the national anthem: "The Land of the Free/The Home of the Brave."