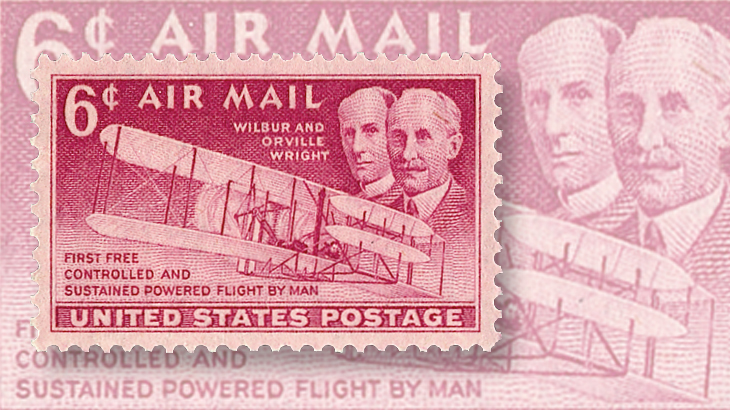 Orville Wright is pictured at right on this 1949 6¢ airmail stamp honoring him with his brother Wilbur, pictured beside him.

Inventor and aviation pioneer Orville Wright was born Aug. 18, 1871, in Dayton, Ohio. His brother Wilbur was more than four years older, and they were both in their 30s when they developed and constructed a successful airplane and completed the first manned powered flight in 1903.

Orville’s love of bicycling led the brothers to establish a bicycle business in Dayton, but they also followed the exploits of glider developers and pilots, and used their inventiveness to begin work on their own gliders.

They took their experiments to the beach at Kitty Hawk, N.C., and modified their gliders while developing a lightweight engine in collaboration with their mechanic, Charlie Taylor.

Orville piloted the first powered flight on Dec. 17, 1903, flying 120 feet in 12 seconds. The fourth and final flight that day, with Wilbur at the controls, traveled 852 feet.

The Wrights demonstrated their invention over the next few years, established their own aviation business in 1909, and began training pilots the following year.

Wilbur Wright died after being diagnosed with typhoid fever in 1912. Orville continued to work in aviation, and became a member of the board of the National Advisory Committee for Aeronautics, which would eventually lead to the creation of NASA, the National Aeronautics and Space Administration.

On Dec. 17, 1949, 46 years after the brothers’ first flight, and less than two years after Orville’s death, an airmail stamp showing both men, as well as their 1903 airplane in flight, was issued (Scott C45).

Somewhat oddly, the portraits show the two men long after that early flight. The portrait of Orville (at right) is based upon a photograph taken in 1928. Additional stamps honoring the Wright Brothers' accomplishments have been issued over the years.