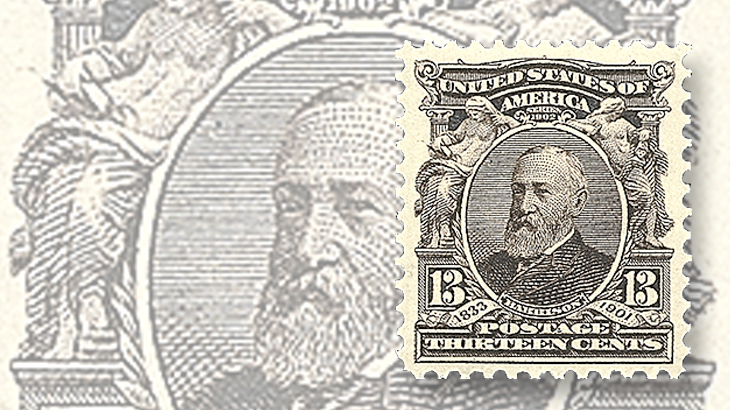 A 13¢ memorial stamp for President Benjamin Harrison was issued in November 1902.

The 23rd president of the United States, Benjamin Harrison, was the grandson of the nation’s ninth president, William Henry Harrison (1773-1841). His great grandfather, Benjamin Harrison V (1726-91), was a plantation owner and signer of the Declaration of Independence.

He joined the volunteer infantry of the Union Army during the Civil War, and ran unsuccessfully for governor of Indiana in 1876. He served from 1881 to 1887 in the United States Senate and was elected president in 1888.

During his presidency, the Republican Harrison held the Pan American Conference to establish better relations among the countries of the American continents, and enacted the Sherman Anti-Trust Act in 1890.

He was also the first president to attend a major league baseball game while in office, watching the Cincinnati Reds defeat the Washington Senators 7-4 in an 11-inning game on June 6, 1892.

After Queen Liliuokalani of Hawaii was deposed in 1893, Harrison asked the Senate to approve the annexation of Hawaii. The Senate refused to act.

A 13¢ memorial stamp honoring him, printed in purple black, was issued the following year (Scott 308). Several other stamps for Benjamin Harrison have followed over the years.