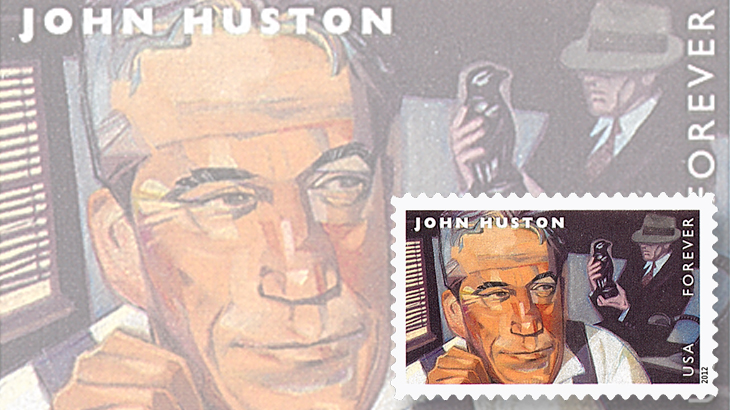 Film director, screenwriter and actor John Huston, on a forever stamp issued in 2012.

Huston, who was born Aug. 5, 1906, in Nevada, Mo., was on one of four directors featured in the set, which also honored John Ford, Frank Capra and Billy Wilder.

The stamp design not only shows Huston in the foreground, but it also features an apparent likeness of Humphrey Bogart in the role of detective Sam Spade in one of Huston's best known films, The Maltese Falcon (1941).

Long after his parents divorced, John went to live with his father in New York and was cast in small roles on stage. He began writing scripts for films, and after several successes he was given the directing assignment for his adaptation of Dashiell Hammett's detective novel The Maltese Falcon.

Huston continued to write and direct: The Treasure of the Sierra Madre (for which he won Academy Awards for directing and screenplay) in 1948, The Asphalt Jungle in 1950, The African Queen in 1951, and many others.

Huston also acted in a number of films from the 1960s into the 1980s. His daughter Anjelica Huston (born 1951) is an accomplished actor, director and producer.