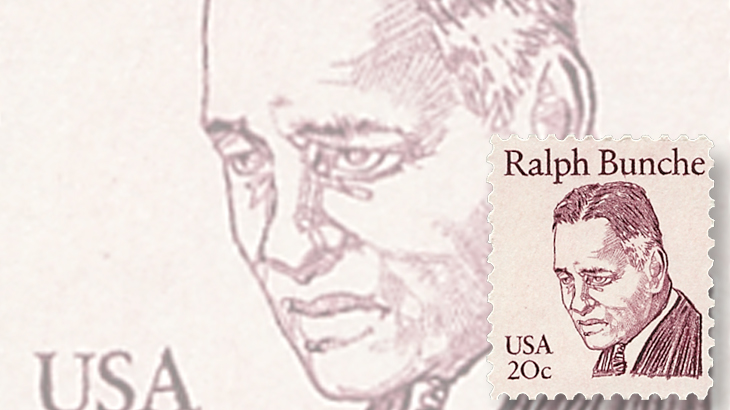 A 20¢ definitive stamp in the Great Americans series honoring Ralph Bunche was issued in 1982.

American diplomat and educator Ralph Bunche was born in Detroit, Mich., on Aug. 7, 1903. He graduated as valedictorian of his high school class in Los Angeles, and also at UCLA, where he majored in international relations. He then earned his doctorate in 1934 after studying political science at Harvard.

Bunche taught at Howard University beginning in 1928 while working on his doctorate, and chaired Howard's political science department until 1950.

Always active in civil rights, Bunche wrote and published A World View of Race in 1936, participated in the 1963 March on Washington for Jobs and Freedom with Martin Luther King Jr., and the 1965 Selma Civil Rights march.

During World War II, Bunche served as an analyst in African affairs for the Office of the Coordinator of Information (later the Office of Strategic Services).

Bunche was instrumental in the creation of the United Nations and its Universal Declaration of Human Rights, and served the U.N. as assistant to the United Nations Special Committee on Palestine, and as its principal negotiator in securing a peace agreement between Israel and four Arab nations. The armistice was signed in 1949, and Bunche was awarded the Nobel Prize for Peace the following year. He also received the NAACP Spingarn Medal in 1949, and was awarded the Presidential Medal of Freedom with Distinction by President John F. Kennedy in 1963.