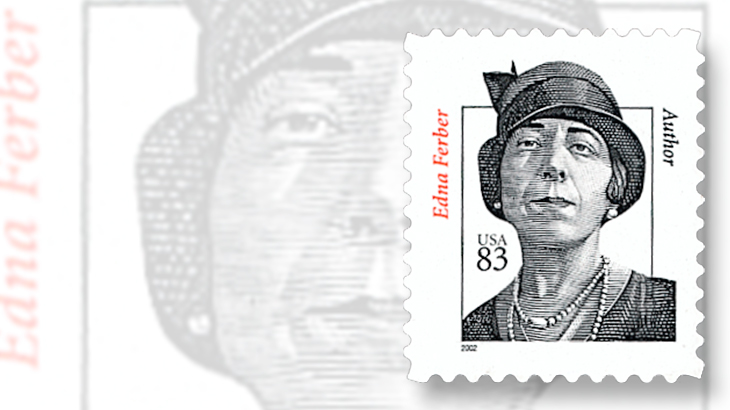 In 2002, writer Edna Ferber was honored on an 83¢ stamp in the Distinguished Americans definitive series.

American writer Edna Ferber was born Aug. 15, 1885, in Kalamazoo, Mich. During her childhood the family moved to other Midwest cities before settling in Appleton, Wis., when Ferber was 12 years old.

She was editor of her high school newspaper and landed a job after graduation as a reporter for the Appleton Daily Crescent, later moving to the Milwaukee Journal. She fell ill and returned to Appleton, where she finished writing her first novel, Dawn O’Hara, which was published in 1911.

She was also published short stories and collections, and a later novel, So Big, won the Pulitzer Prize for fiction in 1925.

In 1926 she completed the novel Show Boat, which Jerome Kern and Oscar Hammerstein II adapted the following year into a classic Broadway musical with the same name.

Ferber was honored on an 83¢ stamp issued July 29, 2002, in the Distinguished Americans definitive series (Scott 3433). A nearly identical variety of the same stamp from a different printer appeared in August 2003 (3434).