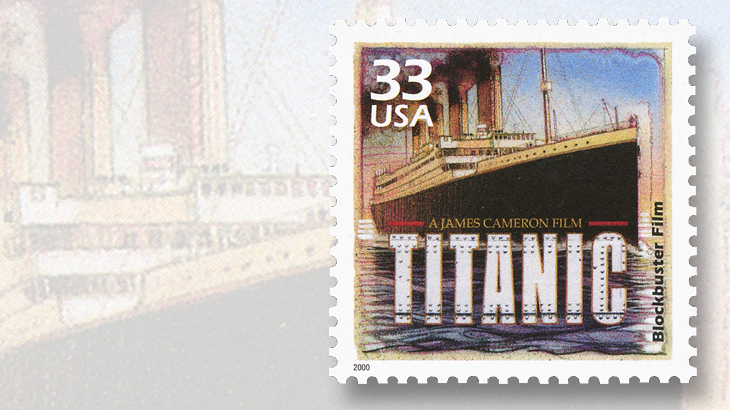 Filmmaker James Cameron's name appears on both the front and the back of this 33¢ Celebrate the Century stamp from 2000.

It happened to Col. Charles A. Lindbergh (1902-74), whose name was shown on the front of the 10¢ Lindbergh Air Mail stamp in 1927 (Scott C10), less than one month after he completed his pioneering nonstop solo flight from New York to Paris.

And it happened to Canadian-born film director James Cameron, whose name is printed on both the front and the back of a 33¢ Celebrate the Century stamp issued in 2000 to commemorate his film Titanic.

James Francis Cameron was born Aug. 16, 1954, in Kapuskasing, Ontario, and moved with his family to California when he was 17.

Since becoming a filmmaker in the late 1970s, Cameron has been responsible for creating some of the top motion pictures in history, including the two top-grossing films worldwide: Avatar in 2009, and Titanic in 1997.

The 33¢ Titanic stamp (Scott 3191l) has the phrase “A James Cameron Film” printed just above the movie title on the front.

On the reverse is printed: “Adding romance and elaborate special effects to the tragic story of the ill-fated luxury liner, James Cameron’s 1997 film Titanic was a colossal success at box offices worldwide and won 11 Academy Awards, including Best Picture.”