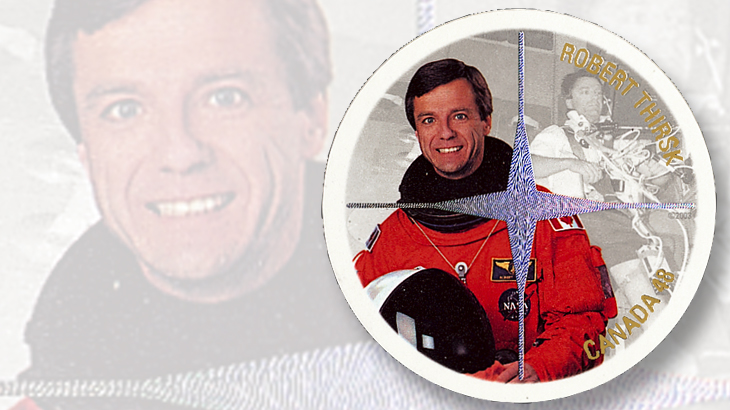 On Oct. 1, 2003, Canada Post issued a pane of eight round self-adhesive 48¢ stamps commemorating eight Canadian astronauts who had flown into space (Scott 1999).

Among those honored was Robert Thirsk, who was born Aug. 17, 1953, in New Westminster, British Columbia, Canada.

According to the Canadian Space Agency, Thirsk received a Bachelor of Science degree in Mechanical Engineering from the University of Calgary in 1976, a Master of Science in Mechanical Engineering from the Massachusetts Institute of Technology in 1978, a Doctorate of Medicine from McGill University in 1982, and a Master of Business Administration from the MIT Sloan School of Management in 1998.

When the stamps were issued, Canada Post reported, “Robert Thirsk, an engineer and medical doctor, flew aboard the space shuttle Columbia in 1996 to perform a series of experiments on microgravity and life sciences in the shuttle's Spacelab module. His 17-day mission was the longest for a Canadian astronaut.”

Six years after the stamps were issued, Thirsk returned to space as “the first Canadian astronaut to fly a long duration expedition aboard the ISS [International Space Station],” according to the Canadian Space Agency. Thirsk remained on the station for 188 days conducting research and repair work.

Thirsk resigned as an astronaut in 2012, and is currently serving as chancellor of the University of Calgary. The university notes that "Thirsk holds the Canadian record for the longest time spent in space, at 204 days, 18 hours."